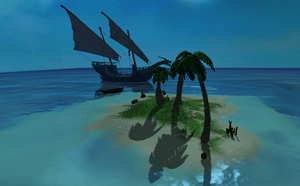 Milky Bay is a hidden island in the Arc region of the Wushanko Isles. Travelling to the island requires finding a message in a bottle on the south-east beach of Waiko, which can be investigated to receive a treasure map.

On the island, players can talk to Milky Joel (who is a coconut) to receive one taijitu. Milky Joel warns the player about The Harbinger, but does not elaborate. There is also a procedurally-generated amount of bamboo trees and tortles on the island. An ornate tortle may also rarely spawn amongst the regular ones.