The Island Which May or May Not Have Monkeys on It 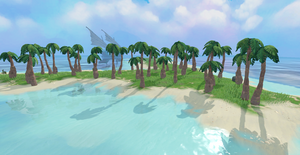 A view of the island

The Island Which May or May Not Have Monkeys on It or (Trademark Pending) Island is a hidden island in The Arc region of the Wushanko Isles. Travelling to the island requires finding a message in a bottle on the beach of Aminishi to the east of your ship, which can be investigated to receive a treasure map.

The message in a bottle to locate this island was last visible 2 days ago on 30 June. It will be visible again in 2 days on 4 July. (wrong?) Once a message in a bottle is found and when a player has walked near its spawn location when it was visible it will always be visible, unless the message in the bottle or its treasure map is in the player's bank or inventory.

On the island, players can talk to Swabbie Steve, who gives the player one taijitu. There is also a procedurally-generated amount of bamboo trees and tortles on the island. An ornate tortle may also rarely spawn amongst the regular tortles.

Wearing an monkeyspeak amulet results in a longer dialogue than just an "Ook!" response. He tells how his ship "The Barrel" was sunk by The Harbinger.