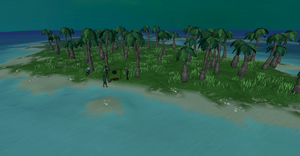 Cannonball Run is a hidden island in the Arc region of the Wushanko Isles. Travelling to the island requires finding a message in a bottle on the southern shore of Cyclosis, which can be investigated to receive a treasure map.

On the island, players can talk to The Cannonballs to receive one taijitu. Two bamboo trees can be found growing on the island.