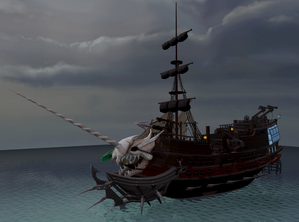 The Harbinger at sea.

The Harbinger is a ship which patrols The Arc, inspiring dread in most of the islanders. The Harbinger is described as an ominous vessel that is shrouded in mystery and fear, with Lookout Ekahi claiming that boarding the ship would be worse than death.

It was initially mentioned briefly by castaways scattered throughout the Arc, and by talking to the crew at some points. Many of the Tales of the Arc released with chapter 2 of the Arc directly involve The Harbinger.

There are various stranded castaways who speak of The Harbinger.

Interaction during Tales of the Arc[edit | edit source]

The following takes place during various Tales of the Arc

During Jed Hunter, Jed says he was going to sell his 'cargo' to The Harbinger, shocking Lookout Ekahi that he was working for it and was going to sell him as well. Jed then tries to escape, but becomes 'payment' to the Thalassus. Mister Gully can be asked (before unlocking the cargo hold) about The Harbinger of how he thought it to be a myth, a ghost story to scare the young'uns.

During Eye for an Eye, Jed returns after being picked up by The Harbinger, and interrogated/tortured by its captain. He managed to escape it in order to attempt to enact revenge on Ekahi. Jed is killed (again), but not before infecting Ekahi, causing him to start transforming into a zyclops. 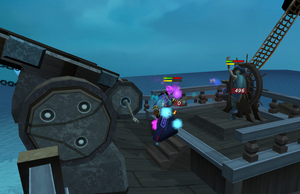 Battling Captain Cora at the helm of The Harbinger.

After attempting several cures, repairing and upgrading Sarim's Revenge, and talking with Gully, the crew finds and intercepts The Harbinger again. This time, Sarim's Revenge has weapons - they blasts a hole in The Harbinger and the captain boards it. The captain fights through many undead crewmen and reaches Captain Cora, who reveals that she is indeed Gully's ex-wife.

Cora was using The Harbinger to attempt to contain the curse that afflicted the khan of Goshima (her adopted mother) after Cora had revived her by tethering the khan's soul to her body. Cora was kidnapping islanders from the other islands of the Arc to feed the khan, so that the khan would continue ruling Goshima. Unfortunately the khan could not control herself and fully transformed into a jiangshi, killing everyone on Goshima. Cora does not believe this, so Sarim's Revenge and The Harbinger sail to Goshima so Cora can see it for herself. Cora finally realises her error and removes the tether on the khan, letting her die. This lifts the zombie curse from all of the afflicted, including Ekahi.

After this, The Harbinger is not seen again, and is presumably no longer a threat to the Arc now that the captain has seen what she has wrought. Cora intends to find former Goshima residents that fled to the rest of the Arc, bring them home, and rebuild Goshima - she would presumably use The Harbinger to do so. She does not know who will become the new khan - she was the closest to family that the former khan had, but believes that her actions deserve punishment.