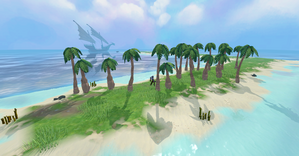 Christmas Island is a hidden island in the Arc region of the Wushanko Isles. Travelling to the island requires finding a message in a bottle in the Spirit Realm of Aminishi. The bottle is located on the beach below where the Aminishi moai rested. Investigating the bottle rewards a treasure map.

On the island, players can talk to Manti Claws, brother of Shanty Claws, to receive one taijitu. There is also a procedurally-generated amount of bamboo trees and tortles on the island. An ornate tortle may also rarely spawn amongst the regular tortles.