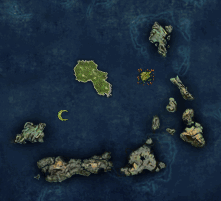 The Bowl is a region within the Wushanko Isles accessible by the Player owned ports minigame, found southeast of The Scythe. It is the fifth region opened up by the player advancing through the minigame. Rich in jade, a draw to pirates and prospectors alike. The khans of the Bowl are more interested in wealth and luxury than in military or political power, an attitude which draws merchants as thickly as flies. There are some Eastern Creatures here, that are rare to find anywhere else, such as winged horses, whales, flying turtles and thunderous mountain elephants.

The islands of the Bowl are:

Allies and enemies of the portmaster[edit | edit source]