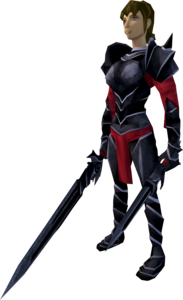 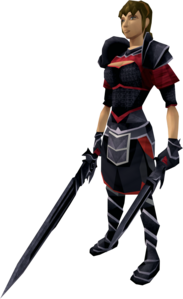 Bosun Evie Higgs, also known as the Black Knight sergeant, is a former Kinshra sergeant who serves as bosun aboard the Sarim's Revenge.

Evie is an seasoned Black Knight, having fought during the Battle of Lumbridge for Zamorak,[1]. She climbed alongside the ranks with Lieutenant Crane, one of her best friends, and as such, they are on good terms with each other.

She is the elder sister of Jacob Higgs, whom she has a close relationship with, even transferring to Draynor Village so they could be close to each other.[2] She is knowledgeable about boats, claiming she knows them better than Jacob.[3]

At some point, Jacob was arrested for theft and sent to Port Sarim Jail. When "Iron Link" Jed attacked Port Sarim, he made off with several prisoners, including Jacob.[4] When the captain of the Sarim's Revenge went to tell her of Jacob's fate, she signed up immediately, leaving the captain wondering who had hired who.[5] In doing so however, she deserted from the Kinshra.[6] In order to better hide from her pursuers, she requested the captain provide her with a set of tetsu armour. By the time they finally caught up to Jed, Jacob had already been sold to the khan of Goshima.[7]

After Lookout Ekahi was zombified by Undead Jed on Cyclosis, the crew of the Sarim's Revenge travelled to Tuai Leit, but were attacked by The Harbinger, led by Captain Cora. When Cora demanded Ekahi in exchange for their safety, Evie vocally opposed the idea along with the majority of the crew. In response, The Harbinger opened fire upon the Sarim's Revenge. Evie helped keep the ship afloat, repairing the damage. She demanded they proceed to Goshima, but relented when told the ship could not survive the sea in its current condition. She helped repair the ship then travelled with the crew to Goshima. She stayed near the ship while the captain obtained items necessary to construct a cannon and found a note from Jacob begging Evie to abandon him, assuring her he was safe. She built the cannon and named it Vera, commanding it when the Sarim's Revenge once again confronted The Harbinger. She damaged the enemy ship, allowing the captain to slip in and confront Cora. They travelled back to Goshima and Cora confronted the Khan, ending it once and for all.

When the captain needed to assemble a strike force to stop The Ambassador's ritual, Evie believed that they bring along several soldiers to distract the Ambassador's minions while they stopped the ritual, and suggested her friend Lieutenant Crane, having heard she was positioned in an underground base near the prison cells. Crane agreed to help the captain as long as they checked in on her sister, Tessa, and became enraged upon learning that Commandant Bletchley had failed, enslaved and cut her tongue out, demanding that he die for his actions. She suggested to bring Evie along, believing that she shouldn't miss out on giving out a "Zamorakian lesson". Higgs gladly accepted the offer and snuck onto the rooftop of the Black Knights' Fortress, where she scolded Bletchley for killing off talent, before Crane appeared behind him and the two tortured and killed him.

In the future seen in Once Upon a Time in Gielinor: Finale, Higgs will become a captain of the Grey Knights, infiltrating the Black Knights' Fortress once more alongside Meg, Eva Cashien, Relomia, and The Raptor to stop a plot of the Kinshra. It is unclear whether she managed to find her brother or not by that point.

Evie has great respect for strength and combat prowess; even considering violence against the fishers of Whale's Maw.[8] When travelling through the islands, she shows respect to the acolytes of Seiryu due to their skills in combat.[9] She also considers Commander Akhomet to be a good role model.[10] She has a distrust of gnomes though, considering them to be deceptive, apparently having fallen foul of them before.[11]

She has an appreciation of powerful weaponry and armour, being pleased to receive a set of tetsu equipment.[12] Upon seeing the cyclopes of Cyclosis, she considers how best to weaponise them.[13] She also created Vera, the cannon aboard the Sarim's Revenge.