Quartermaster George "Gully" Gullivan, known as Mister Gully before the Impressing the Locals miniquest, is a pirate captain. He is located upstairs in the player-owned port during the Impressing the Locals quest or east of the player-owned portal thereafter. He ignores the player until they mention that Surula sent them. He then agrees to help crew a ship to the Eastern Lands, serving as the ship's quartermaster.

After the quest, he can be found standing next to the ship Sarim's Revenge, on the northern-most dock at Port Sarim. He can also be found on the north-eastern dock at the Port district in Menaphos.

He has a seagull named Steven on his shoulder that occasionally defecates down his back, to his annoyance. Gully is wearing excessively 'piratey' attire, including a very large hook and a septicorn hat.

During the Harbinger miniquest, he causes the player to question a possible connection between him and Captain Cora. Quartermaster Gully and Captain Cora's connection seems distant and mysterious during the Harbinger miniquest. It is later revealed in Ghosts from the Past that Captain Cora was once the wife of Quartermaster Gully. She was then sold as a slave when her parents were killed in an attack on Tuai Leit during a vacation. 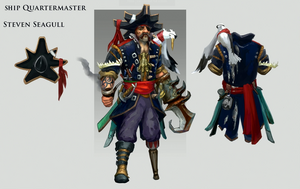 This information has been compiled as part of the update history project. Some updates may not be included - see here for how to help out!
Retrieved from ‘https://runescape.wiki/w/Quartermaster_Gully?oldid=35953085’
Categories:
Hidden categories: