From the RuneScape Wiki, the wiki for all things RuneScape
Jump to navigation Jump to search
Not to be confused with Cyclossus.

Cyclosis is an island in The Arc region of the Wushanko Isles. To access it, the player must have successfully located and explored it in a voyage at their player-owned port.

The Junk of One Cyclops[edit | edit source]

Main article: The Junk of One Cyclops

The Junk of One Cyclops is a shop run by Wan Pian (flotsam merchant), where players may buy and sell sea shells and driftwood for chimes.

Sweet Goods is a shop run by Sinuman (food merchant), where players may buy and sell berries and berry seeds for chimes. 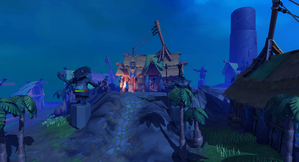 Cyclosis at night, seen during the Eye for an Eye tale.

Cyclosis is the island on the bottom-right of this image.

In Cyclosis, the player sends a ship to explore the island, after you begin to hear rumours about its existence.

This information has been compiled as part of the update history project. Some updates may not be included - see here for how to help out!
Retrieved from ‘https://runescape.wiki/w/Cyclosis?oldid=35687772’
Categories:
Hidden category: