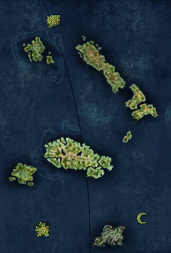 The Scythe is a region within the Wushanko Isles accessible by the Player owned ports minigame, found east of The Hook. It is the fourth region opened up by the player advancing through the minigame. The Scythe is a large island chain covered in cherry trees. The many soothsayers and seasingers of the area often provoke their khans to wage war upon each other; this and the preponderance of sea monsters make the Scythe dangerous to traverse. The islands of the Scythe are:

From what the barmaid tells the player, there are a number of Purists in this region that belittle and insult those affected by the affliction that gives humans parts of normally-fish anatomy; these afflicted are commonly known as sea orphans. There are also a number of strange creatures here, not found elsewhere, such as Terracotta nymphs, flying turtles, mountain giants, cave giants, river giants, sea bears, and foul-stinged rays.

Allies and enemies of the portmaster[edit | edit source]