From the RuneScape Wiki, the wiki for all things RuneScape
Jump to navigation Jump to search
This article is about the region accessible through player-owned ports. For other uses, see Skull.
Not to be confused with The Skulls. 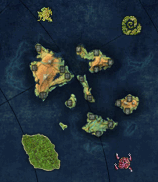 The Skull is a region within the Wushanko Isles found between The Arc and The Hook. It is the second region opened up by the player advancing through the player-owned ports minigame. It is a heavily fortified area in fear of an invasion from the West, possibly due to its proximity. The area is known to have gunpowder, which the Khans use to maintain a warlord status in the area. One-eyed sea serpents, hydras, and Sea Lizards, are found here. After a voyage, the player may have a sailing outpost on Thalassia. The islands of the Skull are:

battling sea monsters will be essential for success.