From the RuneScape Wiki, the wiki for all things RuneScape
Jump to navigation Jump to search
This article is about the island. For the elite dungeon, see Temple of Aminishi.
For the moai, see Aminishi moai.

Aminishi is the name of an island in The Arc region of the Wushanko Isles. There is a larger island to the south, separated from the north island by a channel shallow enough to be waded through. The khan of Aminishi lives on the north isle. The southern isle is home to the Acolytes of Seiryu, an order of monks that worship the legendary azure dragon. They may ascend from their mortal form to an elemental form and then become spirit dragons. 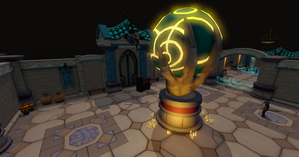 The door to the Azure room. 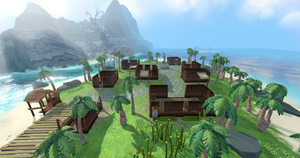 The north-eastern part of Aminishi.

This part of Aminishi can only be accessed after partial completion of the Curse of the Black Stone quest. After the quest, players may go back to Goshima and get the Azure key from the eastern of two trunks north of the north-east house.

This key unlocks the last door on the first floor of the Temple of Aminishi (before the final barrier, where Oyu the Quietest spawns). Entering this door leads to the Azure room and the door at the end of this room leads to the eastern part of the island where a sand mound can be dug on the Northern shore to find a second key that opens the trunk inside the Azure room, rewarding the player with some Player-owned port resources.

There are skilling spots for Bamboo and Salty crabletines (North-east Aminishi mine), as well as a Bank deposit box, by the south-east dock.

You can just see the Islands That Once Were Turtles from the eastern side of the island.

Not to be confused with Spirit Realm of the Wilderness.

During and after the Spiritual Enlightenment miniquest, the Spirit Realm can be accessed through the Well of Spirits requiring spirit dragon charms.

This information has been compiled as part of the update history project. Some updates may not be included - see here for how to help out!
Retrieved from ‘https://runescape.wiki/w/Aminishi?oldid=35702781’
Categories:
Hidden categories: