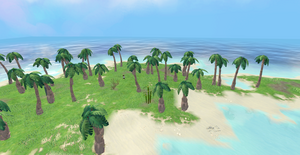 Eisetes Cretor is a hidden island in the Arc region of the Wushanko Isles. Travelling to the island requires finding a message in a bottle on the northernmost tip of the fortress island of the Islands That Once Were Turtles, which can be investigated to receive a treasure map.

The message in a bottle to locate this island was last visible 1 day ago on 18 May. It will be visible again in 6 days on 25 May. (wrong?) Once a message in a bottle is found and when a player has walked near its spawn location when it was visible it will always be visible, unless the message in the bottle or its treasure map is in the player's bank or inventory.

On the island, players can talk to the gnome Azalea Oakheart to receive one taijitu and the ability to use the Tuai Leit gnome glider. Two bamboo trees can be found growing on the island.