Message in a bottle is an item found on the northern shore of the first island in The Islands That Once Were Turtles network, by the mushroom patch. It can be investigated to receive a treasure map, which leads players to Eisetes Cretor. Teleporting with an Islands That Once Were Turtles teleport tablet will place the player right next to the bottle.

This message in a bottle was last visible 1 day ago on 17 August. It will be visible again in 6 days on 24 August. (wrong?) Once a message in a bottle is found and when a player has walked near its spawn location when it was visible it will always be visible, unless the message in the bottle or its treasure map is in the player's bank or inventory. 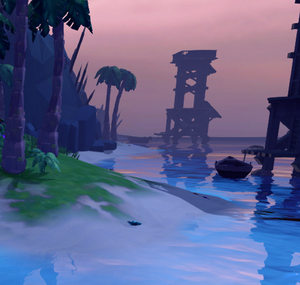 The location of the message in a bottle.