From the RuneScape Wiki, the wiki for all things RuneScape
Jump to: navigation, search
This article is about the race. For other uses, see Moai (disambiguation).

Moai are a race of statue-like, possibly spirit-like, beings. 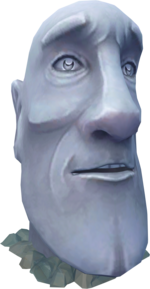 A moai will develop a connection with the island it lives on and will see the island as an extension of itself. Moai can die, if they are severed from their island. They can also die by conventional means. They can be transferred to another island, so long as their respective island soil is in contact with them.

Moai communicate with each other through a "network", where they can share their thoughts with each other. Some moai, such as the Aminishi moai, prefer using the network to communicate, as they are not used to physically speaking to others. This network was apparently silenced by some unknown source, which caused them to be isolated and fearful for the rest of their kind as they do not have any idea about their current whereabouts.

The moai network and the moai themselves are both incredibly old. The moai claim to have used their network for millenia, since before a time when all the oceans were ice.