From the RuneScape Wiki, the wiki for all things RuneScape
Jump to navigation Jump to search
The Old School RuneScape Wiki also has an article on: osrsw:Pincers 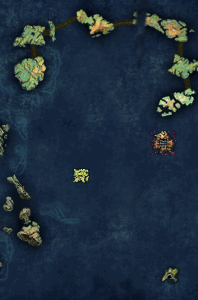 The Pincers region. Kei Pi and the Glittercaves are visible in the bottom-left corner.

The Pincers is a region within the Wushanko Isles accessible by the Player-owned port minigame, found far from the West. It is the sixth region opened up by the player advancing through the minigame. This is where Felix the Black Marketeer lived before beginning his journey to the West. Its khans have armies of ships and soothsayers and wage war against each other at a whim. Quin lives here, in the palace known as Paradise.

The islands are joined together by massive bridges and dams in a failed attempt to engender togetherness and trust. It is a hotbed of intrigue and betrayal that even the player takes part in. Steel production here bolsters the massive shipping industry.

There are several powerful monsters here, such as Leviathans, Krakens, Lighthouse Giants, giant centipedes, and shapeshifters.

The islands of the Pincers are: