From the RuneScape Wiki, the wiki for all things RuneScape
Jump to: navigation, search
For other variants of this item, see non-lucky, golden.
Lucky Saradomin godsword? (edit)

The Lucky Saradomin godsword is a piece of lucky equipment that can be won from Treasure Hunter. It has the same bonuses and passive effect as the regular Saradomin godsword, but is untradeable and has a slightly different appearance – it is noticeably darker than the original version.

Healing Blade, the special attack of the Saradomin godsword.

The Lucky Saradomin godsword has a special attack, Healing Blade, which deals 175% weapon damage (though testing results show the special does up to 270% damage), and restores life points by half of the damage dealt and prayer points by 2.5% of it. The special is found under the Constitution abilities. The special has no cooldown and can be used as long as you have 50% adrenaline (or 50% special attack energy on legacy mode), making it essentially an infinite source of health and prayer points.

The Lucky Saradomin godsword (passive) is made by using the godsword on the altar in Commander Zilyana's room in the God Wars Dungeon, requiring 70 Agility. This makes it lose its special attack, but gives it a passive effect that has a 25% chance of activating upon a successful hit, healing 3% of your maximum life points and recovering 3% of your maximum prayer points with each successful hit. 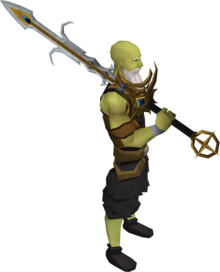 The update history project is a work-in-progress – not all updates to this topic may be covered below. See here for how to help out!
Retrieved from ‘https://runescape.wiki/w/Lucky_Saradomin_godsword?oldid=34687311’
Categories:
Hidden categories: