From the RuneScape Wiki, the wiki for all things RuneScape
Jump to: navigation, search
For other variants of this item, see non-lucky.
Lucky Saradomin sword? (edit)

The Lucky Saradomin sword is a piece of lucky equipment that can be won from Treasure Hunter or obtained randomly from a Four-leaf clover necklace. It has the same stats as the normal Saradomin sword, but it has a slightly different appearance. 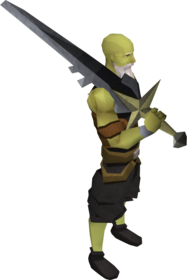