From the RuneScape Wiki, the wiki for all things RuneScape
Jump to: navigation, search
For other variants of this item, see non-lucky.
Lucky elysian spirit shield? (edit)

The lucky elysian spirit shield is a piece of lucky equipment that could previously be won from Squeal of Fortune, now you may obtain it via Treasure Hunter as a very rare prize. It has the same stats, level requirements and passive effect as a normal elysian spirit shield but is untradeable. 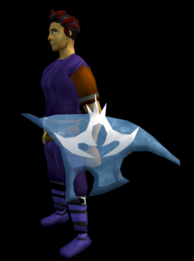 The update history project is a work-in-progress – not all updates to this topic may be covered below. See here for how to help out!
Retrieved from ‘https://runescape.wiki/w/Lucky_elysian_spirit_shield?oldid=33933241’
Categories:
Hidden categories: