From the RuneScape Wiki, the wiki for all things RuneScape
(Redirected from Ignore list)
Jump to: navigation, search
See also: Friends List
The Old School RuneScape Wiki also has an article on: osrsw:Ignore List 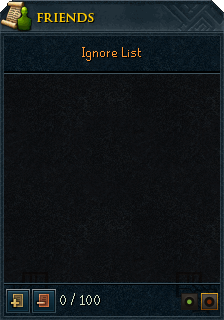 The new ignore list interface, as of The Clan Camp update

The Ignore List is a part of Friends List that players can use to block messages from up to 400 specifically-selected players, especially those that the player finds annoying or abusive. It used to be under a separated tab. A player "ignoring" a specific person cannot see that person's text in public or private chat. However, unlike turning Private Chat "off", the player doing the ignoring does not appear offline to the person being ignored. If the person being "ignored" sends a private message to the player however, it will appear as if the message has been sent. In addition if he/she tries to enter your Friends Chat, a message stating that he or she is not allowed to do that will be sent. The ignore feature also blocks trade requests sent by the player who was ignored.

The ignore list has a capacity of 100 names for free players and 400 for members.

If the ignore list is filled to a near-full capacity, glitches will begin to occur in which the phrases and/or words inside the list begin to stack on top of each other.

The current and previous versions of the Friends and Ignore List icons
Retrieved from ‘https://runescape.wiki/w/Ignore_List?oldid=34203002’
Category:
Hidden categories: