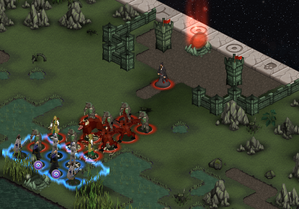 Brother Constantius was a Saradominist priest and military leader active during the God Wars. After Saradomin's armies were at some point during the God Wars driven out of Senntisten by a strong assault from Zamorak, Saradominist priests slowed the flow of Zamorakian troops out of the city for centuries, culminating with Brother Constantius and Obsido leading the final expedition against Zamorakians, depleting their flow of troops towards the region of modern-day Misthalin.

Brother Constantius is controlled in the Saradomin Strikes campaign level "Hold The Line", where he and Brother Obsido, along with two units of Saradomin rangers and white knights, hold out against a Zamorakian army including werewolves, necromancers and greater demons. Constantius reappears as an enemy leader in the "God Wars" level of the Guthix Awakens campaign, where he replaces Commander Zilyana as the leader of the Saradominist army in the God Wars Dungeon. In the level, he faces against armies led by key Third Age leaders such as General Graardor, Wingman Skree, and Pazuzu, while trying to escape the dungeon before Aeternam would freeze the cavern. Since succesfully completing the level requires Constantius to be killed, it is presumed that he is now deceased.