From the RuneScape Wiki, the wiki for all things RuneScape
Jump to navigation Jump to search
For the achievement, see Beneath Cursed Tides (achievement).

Beneath Cursed Tides is a quest released on 14 December 2015. It is based on a RuneLabs suggestion about the mysterious vanishing of Tutorial Island during the update that expanded the Wizards' Tower to include where Tutorial Island originally was.

This quest involves the player, Wizard Myrtle and Vannaka searching for survivors and diving to the sea south of the Wizards' Tower to investigate a sunken Tutorial Island.

A few years ago, the island mysteriously vanished and Myrtle from the Wizards’ Tower is keen to find out why. In Beneath Cursed Tides, you’ll be searching for survivors and working with Vannaka, journeying to the bottom of the sea to investigate the islands[sic] watery fate. A dark tale awaits. Expect a journey full of teary nostalgia and classic humour. 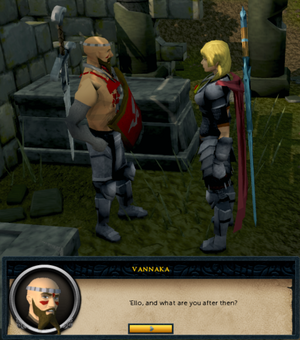 Speaking to Vannaka in Edgeville near the Dungeon Entrance.

Speak to Wizard Myrtle at the fountains in front of the Wizards' Tower. She wants to know what happened to her mentor, Terrova, the magic instructor on Tutorial Island. However, she is afraid of water and wants to send you to investigate.

Talk to Vannaka, who can be found by the Slayer Master map icon just south of the Edgeville bank. He explains why he left Tutorial Island before it was flooded, and wishes to go back with the player and Myrtle.

Return to Myrtle, who is now standing beside Vannaka, and they ask you to go to Mudskipper Point. This can easily be accessed through the fairy ring code aiq, or by running south of the Port Sarim lodestone. There is a fairy ring to the south of the Wizards' Tower (code dis).

Talk to Myrtle about diving down to Tutorial Island. There are three options you can choose from to do so: Myrtle's spell, your own diving apparatus from your Aquarium, or a fishbowl helmet and diving apparatus. The only difference between the three is cosmetic. You will be sent down to the island.

Read the message in a bottle near the door of the first room finding a key in the base. Your task now is to go through Tutorial Island as if you were a starting player years ago to break the dark magician's curse. There are multiple rooms that involve multiple skills. 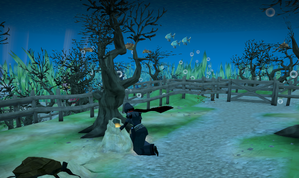 Walk out of the building, and shortly along the path you will find Brynna, who has been turned into a Crassian-Human hybrid. Talk to her about the survival skills. She will then instruct you to catch some raw shrimp swimming around. As you are underwater, you do not need any fishing nets or rods, as they can be caught with bare hands. Once you get some shrimp in your inventory, cook them on the steam vent by the dead tree to create boiled shrimp. Talk to Brynna again, and she expresses her disbelief that you did not burn the shrimp, as it has never happened before. She then demands you bring her some burnt shrimp first instead.

Catch another shrimp, cut some strong seaweed nearby, then attempt to cut a dead tree down. You will snag one of the soggy branches from the tree, which allows you to push the boulder into the hole. Now the dialogue box for the steam vent has an option to burn the shrimp using the extreme heat. Burn the boiled shrimp on the vent, boil the other shrimp, and speak to her again with both shrimps in your inventory. Once that has been completed, you will be sent down the path to the next tutor.

Continuing down the path, you will find a building with another possessed tutor, this time Master Chef Lev. Talking to him explains that cooking bread is no longer necessary, as salads are all the rage.

He will then explain that he's having trouble collecting the Tasty seaweed from his garden patch, because it is occupied by a Large jellyfish. He has the idea to play some music to solve the issue, but he is too scared to do it himself. Obtain Levs music box from him to gather seaweed, then go south of the house. Play the music box in front of the jellyfish: pick option 2, then 3, then 1. They will play short bits of old songs from RuneScape 2. Gather the tasty seaweed, then talk to the Master chef again. 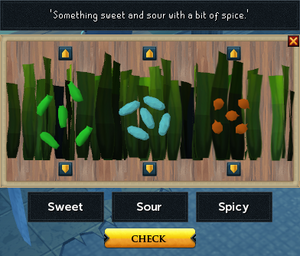 Cooking seaweed for the Master Chef

Place the seaweed on the large table and then pick the correct ingredients. For each column, pick either sweet, sour, bitter, spicy, salty, or mellow, depending on the Chef's instructions. For example, if the text reads:

'Something mellow yet sour with bitter undertones.'

Then the order of your columns would be: mellow, sour, and bitter.

After this is done, proceed on the path to the next house and go down the ladder.

Continue travelling on the path to the North and go inside the building. Look for a 'Cellar' entrance and climb down. You will arrive in the Tutorial Island mines. Talk to the Mining instructor, who wants you to create your own bronze dagger. Your character remarks that it's impossible to work a furnace underwater, so you will have to find a way to have it work regardless.

Mine soggy copper ore and soggy tin ore, put it in the furnace, close the furnace doors, operate the pump, then light the furnace. After doing this, open the door and your bronzish bar is smelted. Click on a nearby anvil to be prompted to smith a bronze butter knife then return to the instructor one last time. When you're done talking to him, head east toward Vannaka. 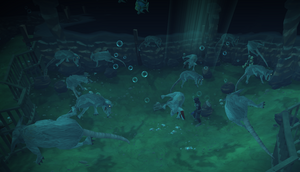 The sea rats lie dead after your combat training

Whilst talking with Vannaka, he believes you have the capability to wield a Two-handed sword in one hand, just as he did. Enter the gate and click on the sword and shield in the centre of the enclosure to begin combat training. He now guides you through the encounter. During the blindfolded scene, click on all the water bubbles and rat heads in order to progress. After killing all the giant sea rats, return to Vannaka, then climb the ladder to the north and proceed east from there.

Exit the caves through the ladder. You will arrive next to the island's Bank, where you will find the next tutor.

Speak to the Financial Advisor inside the bank. He will reveal that the banker is long dead, as he wasn't transmogrified into a crassian when the island sank. Furthermore, he was the only person with the bank pin, and so you need to find a way to figure out the code.

Read the memo and the banker's diary on both tables, and the calendar on the wall behind the bank booths, then proceed to the vault. The code is the birth year of the banker; "139". After opening the vault, talk to the Financial Advisor. He will let you advance to the next stage of the island.

Note: A bug may sometimes cause the Financial Advisor not to respond when you tell you have opened the vault. Teleporting out then returning will fix this issue.

Next, you will arrive at the Tutorial Island chapel, where you can find Brother Brace. Talking to him reveals that he has lost his prayer book, which he needs in order to let you move on. He will then give you his friend list, with the directive to talk to all of his fish friends. Some of them can be located near the chapel, while others can be found west of the bank. They will all act nervous, until one slips up and tells you that they saw it behind a certain piece of scenery, such as the anchor or a cannon or the coral east of the church (the location is different for everyone, however they are all near the church or to the west of the bank). Once the fish has given you the location, search it to find the book. Once found, take it to Brother Brace, and he will inform you that the book actually contained the key for the locked door to the next location, hence why he needed it before you could move on. He sends you on your way to speak with the last tutor. 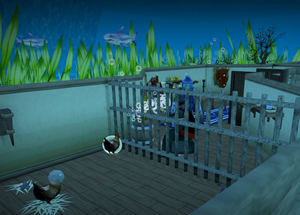 Killing one of Terrova's chickens

Finally, talk to Wizard Terrova. He asks you to cast a wind spell on the chickens to prove your competency in magic. The chickens are strangely not cursed, as they have air bubbles around their heads. Simply click on the chickens to cast a spell on them. This spell places the chickens in a larger bubble; once a chicken goes into a bubble, another chicken spawns. Players need to only defeat one chicken to continue, but are allowed to defeat as many as they wish.

Once you speak to Terrova, you are interrupted by Hector Vivian, the magician who enacted the curse in the first place. He explains that Vannaka is the last piece of his curse, but before doing anything, Wizard Myrtle dives down, overcoming her fear of deep water, and channels a spell against Hector Vivian to stop his evil scheme. 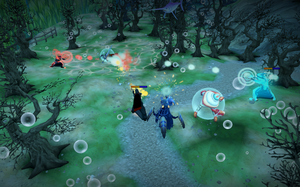 The showdown with Hector Vivian

Once the meters are filled, Hector is "defeated". In order for the battle to be officially over, the player must finish Hector off by trapping him in a bubble. 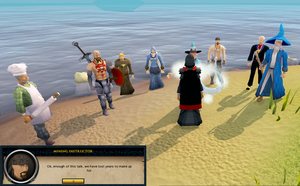 The tutors arrive at Mudskipper point

Return to the mainland and talk to Wizard Myrtle. All the tutors now arrive on dry land in their human forms, discussing what they have missed out on for years. They announce that they will start off fresh, and thank you for your efforts in freeing them from the curse. 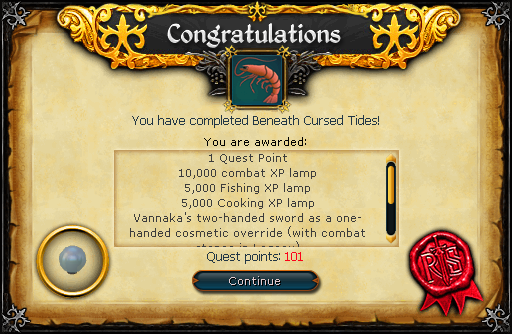 Beneath Cursed Tides is not currently required for any quests or miniquests.