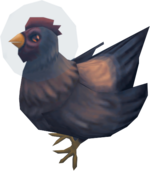 Chickens are birds encountered during Beneath Cursed Tides, and are kept by Terrova for new players to train their magic on. Players are not provided any runes, but players are able to cast a simple air spell without runes in order to defeat them. Only one chicken is required to be defeated in order to progress in the quest, but players may defeat as many as they would like. When they are struck with a magic blast, a larger bubble will surround them and the chicken will float away. Another chicken will spawn shortly after to replace it.

According to Terrova, the chickens are stuck in the pen as magic targets to repent for their crimes, which include the largest grain heist in known history. The grain has still not been located.