From the RuneScape Wiki, the wiki for all things RuneScape
(Redirected from Southern Sea)
Jump to navigation Jump to search
The Old School RuneScape Wiki also has an article on: osrsw:Unquiet Ocean

A number of islets at dusk. 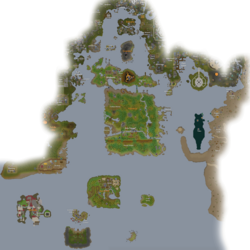 The Unquiet Ocean, also known as the Southern Sea, is a vast area in Gielinor between Asgarnia and Kandarin, and south of Misthalin. It includes most of the islands in RuneScape. The sea is also a very convenient way of transportation, using ships to get from one place to another.

The main way of transportation in the sea is by ships. Ships can take players to and from Entrana, the Void Knights' Outpost, Musa Point, lower Karamja, Brimhaven, Ashdale and the Fishing Platform. Players can charter ships, buy their own ship, although this is only in the Dragon Slayer quest and the ship is destroyed after a crash landing on Crandor, use the Void Knight ships to get to the Void Knights' Outpost, or use the monk ships to get to Entrana. Some ships charge players, such as the charter ships and the ships taking players to Musa Point while others, such as the monk ships and Void Knight ships, will transport the player free of charge. Also, players who have completed The Grand Tree can take a gnome glider to a southern part of Karamja. In addition to this players who have completed Monkey Madness can return to Crash Island and then take a boat to Ape Atoll by talking to Daero on the 1st floor[UK]2nd floor[US] of the Grand Tree.

The Sea is involved with many quests:

There are many activities to be played out at sea: