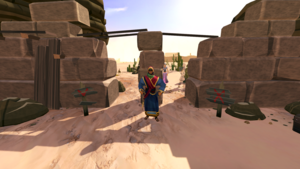 The entrance to the desert

The Shantay Pass is a small area that separates Al Kharid to the north from the rest of the Kharidian Desert to the south. It is inhabited by Shantay and some Shantay guards.

Since the release of the graphical update to Al-Kharid, players no longer need to purchase a Shantay pass or bribe the guards to travel through the arches. Members can pass straight through by clicking on the ground to the south.

Shantay Pass also has a store which is owned by Shantay. The inventory is similar to Ali Morrisane's bazaar.

Shantay used to sell Shantay passes to players, each of which permitted them to exit the southern gate into the Kharidian Desert once. Alternatively, players could bribe the guard for 200 coins to let them through without a pass. 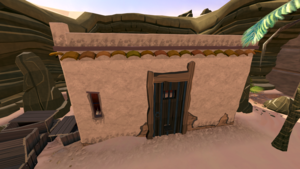 Players can be arrested and placed in a cell at Port Sarim. This can be a useful way of effectively teleporting for free, but the delay caused by failed attempts at escaping makes this less attractive than it used to be. To be arrested by the guards, players can do the following:

The player will then be sent to the jail at Port Sarim. To escape, players can right-click on the door and select the option to pick the lock. When you successfully do so, they are out. Then, all that is left is to walk out the door past the sleeping guard.

Note that this will give the player Thieving experience, but only on a members server. Also, no equipment is required and can be done by free players. It also seems that the more times it is done, the faster it is to get out the next time it is attempted.