From the RuneScape Wiki, the wiki for all things RuneScape
Jump to navigation Jump to search
The Old School RuneScape Wiki also has an article on: osrsw:Contact!
For the achievement, see Contact! (achievement).
"Contact" redirects here. For the lunar spell, see NPC Contact.

Contact! is a members quest that takes place in the Kharidian Desert, in which a player attempts to help the city of Sophanem contact its neighbouring city of Menaphos.

The High Priest of Icthlarin has problems again – this time with the inhabitants of Menaphos. Sophanem is recovering from the plague, yet most of its citizens are still trapped on the other side of the river. Diplomacy has failed and subterfuge beckons. Clearly, this is the sort of job that a shifty adventurer could excel in.

Travel to Sophanem and speak to the High Priest in the southern temple. There will be a cut scene that will say that they have been having problems getting in contact with their sister city of Menaphos, due to Coenus and his archers aggressively guarding the gates. Ask him about ways of getting into Menaphos and pick the option about accessing "from below".

Return to the entrance of the city and talk to Jex, who is nearby in front of a temple with a broken altar (the most northeastern building in the city). He will tell you how to access the dungeons beneath the building. Go down the ladder east of Jex and talk to the guard if you haven't got any lighting source already. He will sell you a torch for 200 coins, and a tinderbox for 50 coins. A bullseye lantern is a better choice because it will go out less often. Alternatively you can take a Seer's headband, as it will never go out. It is strongly recommended that you take good food (monkfish or above), an emergency escape teleport such as the ectophial (if you have access to the War's Retreat Teleport you can use that), a tinderbox (can be on the tool belt), and an antipoison or two. 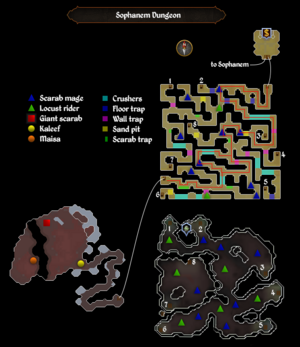 The dungeon under Sophanem is very dangerous, and protection prayers are strongly advised for protection from the monsters that patrol the dungeon. Turn auto-retaliate off through the ability bar, since it might cause you to waste some time fighting back, and/or also cause you to run into a trap, if you're hit at an inopportune moment. Go down the trapdoor and follow the dungeon around until you get to the ladder north of the South-west corner using Protect from Magic prayer.

When following the route to the right, the player will only encounter scarab mages. Therefore, use protect from magic and keep auto-retaliate off.

The dungeon is riddled with various types of traps, which should generally be avoided or bypassed. The magic ability Surge cannot be used to bypass the traps.

Scarab mages can extinguish your light source even if it's a closed lantern, unless you are using the Seer's headband. You will not be able to continue attacking (if you were in combat) until your light source is relit. 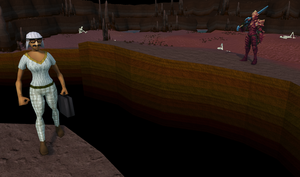 Meeting Maisa in the lowest level of the dungeon

Once you have found the correct ladder (see map above), follow the passage around until you come to Kaleef's body. Search the corpse to get a parchment, read it and continue west to Maisa. Once you tell her that Kaleef is dead, she wants to confirm your identity before trusting you.

Tell her that you helped rescue Prince Ali, and that he was being held in Draynor Village. Ozan and Leela assisted you.

She will then decide you are trustworthy and tell you to speak to Osman, the spymaster in Al Kharid.

Travel to Al Kharid and speak to Osman, who is standing against a pillar inside the palace. If you try to enter the throne room and are told the palace is on lockdown, you must first do the two quests that replaced Prince Ali Rescue: Stolen Hearts and Diamond in the Rough. Try to convince him to come to Sophanem (picking the "It would drive a wedge between the Menaphite cities." option does the trick).

Before returning to Sophanem, make whatever arrangements are necessary to battle a level 86 Giant scarab.

Travel back to Sophanem. Osman is just outside the gates. Talk to him again and suggest the secret entrance just north of the city. 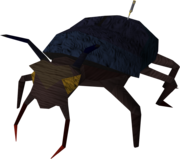 Go back through Sophanem Dungeon to where you found the body of Kaleef. Once you have passed through the maze turn auto-retaliate back on in order to avoid being interrupted in your fight. As soon as you go down the ladder you will see another cutscene where a large scarab appears. 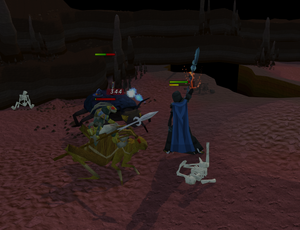 Travel into the cave and fight the level 86 giant scarab with 20,000 life points and no weakness. It can commonly hit into high 300s with melee and ranged. It summons level 68 locust riders and scarab mages with 2,700 life points (which can also do 90 life points of damage with poison) to aid it, which will attack the player at the same time. The riders will attack with ranged or melee, and the mages will attack with magic so you are being attacked by all 3 combat styles at once.

Use Protect from Missiles. A full set of mystic equipment is more than enough for armour, as well as a tier 50 or 60 magic weapon such as a god staff.

You should defeat the minions as quickly as possible. You can then return your focus to the boss; just make sure not to run out of prayer. With the proper tactics and a decent magic level, it is possible to not need a single dose of potion or food.

Using Protect from Melee prayer is recommended against the scarab, and having plenty of food is extremely helpful in this fight. Assuming that your melee skills are above 60 and you have tier 60 weapons, you should have no difficulty in dispatching it, using boosting potions and melee prayers. A halberd can also come in handy, allowing you to fight the boss without standing in its melee range.

A crystal bow, black salamander, or similar ranged weapon should be suitable to fight the Scarab with. Use Karil's or royal dragonhide armour, and use Protect from Missiles. A hand cannon also works as well, but bring extras or a backup weapon such as a crystal bow in case it explodes.

The battle site has lost most of its original safespots and cannon uses in updates. Still, if you stand a distance away, the scarab will not approach. A good method is to turn on protect from range, and range it with royal dragonhide and a level 60 or higher ranged weapon. Be sure to kill the riders as soon as possible, as they will be the only major threat in battle.

In some apparently rare cases, you will get very lucky and the scarab will not summon a single monster to help him fight.

You can protect yourself from the scarab by simply attracting the scarab then standing to the left of the skeleton right before Kaleefs' body although doing this will allow the scarab to summon mages and locusts.

The anti-poison totem will not protect you from the Scarab's poisonous mandibles, but other means of poison prevention, such as antipoison potions, will. The poison hits for around 40 life points, and can be cured with antipoisons.

Once the scarab is defeated, another cut scene will happen where Osman is revealed to be alive (since he blended into the shadows as a spymaster). He talks to you and tells you to take the Keris on the floor, and then teleports away.

If you happen to die at the same time as the scarab or fail to pick up the Keris for some other reason, you can still get it from Osman in Al Kharid for free.

Go back to the high priest. It is suggested that you teleport out instead of tracing back through the dungeon, since there is no quick and easy way to get above ground. He will confirm that Maisa was successful, and reward you. 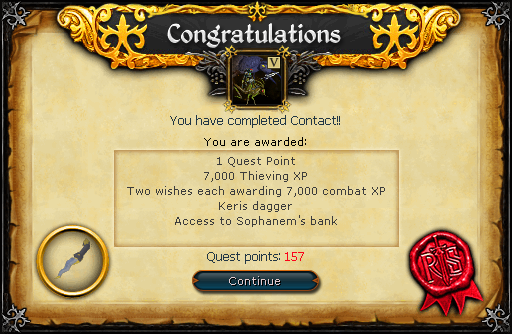 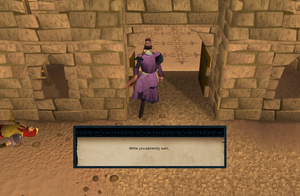 Osman sneaks into the temple after knocking Jex out.

Osman sneaks into Sophanem
The music that plays when Osman is sneaking into Sophanem.
Retrieved from ‘https://runescape.wiki/w/Contact!?oldid=35968546’
Categories:
Hidden categories: