From the RuneScape Wiki, the wiki for all things RuneScape
(Redirected from Menaphite)
Jump to: navigation, search
The Old School RuneScape Wiki also has an article on: osrsw:Menaphites

The Menaphites are a group of people that once inhabited the entire Kharidian Desert. They have lived in the desert for thousands of years and are amongst the oldest surviving factions of humans in Gielinor.

The Menaphites have lived in the desert, in one form or another, since the Second Age. Having existed for roughly 5,000 to 6,000 years, the Menaphites' early history is foggy and is unlikely to ever be completed. The first entirely Menaphite cities are unknown, although the cities of Ullek and Uzer are believed to have been at least partially inhabited by them.

Following Zaros's fall from power and the beginning of the God Wars, the Menaphites were scattered by the massive scale of combat taking place in the Kharidian Desert. Uzer was destroyed at the hands of the Elder-Demon Thammaron and Ullek soon fell to Balfrug Kreeyath, leaving the Menaphites and other desert people temporarily homeless. Furthermore, many of Zaros's followers, known now as the bandits, were forced into exile in the desert, where they caused many problems for the remaining natives.

On the very southern edge of the Kharidian Desert, near the ocean, the Menaphite settlements of Menaphos and Sophanem had recently been founded. The refugees from Ullek, Uzer, and the other settlements arrived in here and began to contribute to the cities, building temples to the gods and offering knowledge in the ways of craftsmanship and war. Soon Menaphos and Sophanem were the Menaphites' greatest capitals. 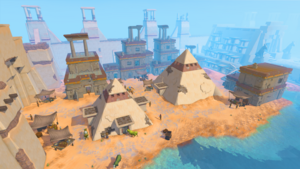 Until very recently, the twin cities of Menaphos and Sophanem were amongst the most prosperous cities in Gielinor. However, Sophanem was recently hit with multiple plagues and was forced to enter a state of quarantine. Menaphos, fearing that the plagues could enter its walls, sealed its gates, closed its port, and barricaded the bridge that crosses the River Elid between the two cities. The cities' reliance upon trade makes such isolation nearly impossible to survive, however, and the Menaphites' survival has become increasingly difficult.

Nardah, the only entirely Menaphite settlement besides Menaphos and Sophanem, also has been plagued. While they initially worshipped Elidinis, a Saradominist priest came to the village and convinced them to worship Saradomin instead. A week after the priest's arrival, he was found dead near the river. The village began to suffer a curse, as their water supplies suddenly went out. Fortunately, a passing adventurer investigated under the mayor's behalf and found that the spirits of the Elid cursed the village for throwing away the statuette of Elidinis. The adventurer quickly fixed the problem and the village began to function normally again.

The Menaphites are known for their continued following of ancient customs. The Menaphites are devout worshippers of the Desert pantheon, a large group of gods that have ruled over the desert since before the God Wars. However, not every Menaphite must follow all of the gods. Most Menaphites follow deities that can prove helpful in their lives, although they do recognise the importance of the entire Pantheon. For instance, a farmer may worship Elidinis, the goddess of the Elid, water, and fertility.

Menaphite architecture is very advanced, made largely of locally mined stone, as well as dried mud bricks from the River Elid. Hieroglyphs and carvings of the god are common and present on almost every structure. The walls of Menaphos and Sophanem perfectly displays of the ingenuity of Menaphite structure; standing many feet tall, these are larger even than those that protect Varrock.

Menaphite culture is very similar to that of the ancient Egyptians - nummification is practised regularly to ensure that the deceased are taken into the next life by the god of the dead, Icthlarin. Large pyramids are built to house important deceased figures such as priests and pharaohs. Slaves numbering in the thousands are made to construct these.

A stamp featuring a Menaphite from a postbag.

A common misconception amongst those less familiar with the Menaphites is that they all hold similar values to the Menaphite thugs that currently reside in the small town of Pollnivneach. In reality, the Menaphite thugs were recently exiled from Menaphos by the rulers of the city. This is due to their active following of the goddess Amascut, The Devourer. This terrorist gang has taken up residence in Pollnivneach, where they seek to establish a foothold in their quest for world domination.