The default name for the pet is Pirate sheep, however it can be changed in the Pets interface. 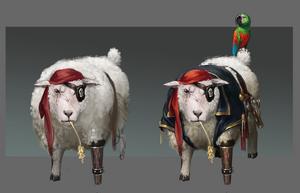 Concept art of the sheep