From the RuneScape Wiki, the wiki for all things RuneScape
Jump to: navigation, search
Captain Deathbeard? (edit)? (edit) 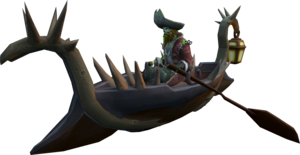 Captain Deathbeard is an undead pirate who was involved in the time-limited event, Deathbeard's Demise. He also occasionally visits the Deep Sea Fishing hub as a random event.

During Deathbeard's Demise, Captain Deathbeard could be found south of Father Urhney's home in the Lumbridge Swamp. He asks players to collect phantom doubloons for him so he can repair his ship, locate his missing undead crew and fight whatever attacked them to begin with.

His appearance randomly changes between undead and fleshed.

Captain Deathbeard may also appear as a side event while participating in Deep Sea Fishing. He may show up in a rowboat near the sailfish fishing spots and ask for directions. Players can click on him to give him directions, and after about two minutes he will row away. Players that gave him directions will be awarded up to 1,940 Fishing experience at level 99.