Gentleman Mallard is a famed privateer, most well-known for leading the pirates of Mos Le'Harmless against the fleet of Rabid Jack in the Battle of the Archipelago.

Mallard, some time after the battle, perished when his ship was destroyed by a sea monster and his body dragged into the sea. Mallard's famed rapier can be purchased in Mos Le'Harmless from Smith.

Mallard as a Merchant[edit | edit source]

Mallard was born to a wealthy merchant family that had established itself well in the Eastern Sea. Mallard's family, already famous for shipping goods across the sea to neighbouring islands and kingdoms, taught him the art of trade and sailing.[1]

As Mallard aged, though, his family gained powerful enemies that sought to end his monopoly. These enemies infiltrated his family's organisation, sinking their ships one by one and buying out or secretly killing any business partners they had. Mallard's family was amongst those victims, and without them the company crumbled and fell.[2]

Now broke, alone, and filled with a lust for revenge, Mallard took to the seas, leading his one remaining ship as a privateer captain.[3]

Gentleman Mallard, now a struggling privateer, began to lust for the destruction of the traitors who had killed his family and destroyed his life. Mallard became an expert fencer, learning to wield a rapier with unrivalled skill and accuracy.

Mallard's crew and power grew as he hunted down and eliminated his traitors. Despite his thirst for revenge, Mallard earned a reputation for his generosity and kindness, fighting only those that had betrayed him and those cruel pirates who wandered the sea. Mallard was known for being fair to his men and generous with his loot, paying his crew well and donating to various charities.[4]

Mallard would gain legendary status when he donated a massive sum of money to Mos Le'Harmless, which had begun to suffer a widespread disease that threatened to wipe out human life in the Eastern Sea entirely. This money was used to buy enough medicine to cure the island's entire populace.[5]

In the recent Fifth Age, the pirate Rabid Jack betrayed his brethren on Mos Le'Harmless and attacked the port, attempting to gain complete control over the flow of ships within the Eastern Sea. Launching an attack from his largest ship, The Scourge, Jack nearly gained the port, but was eventually repelled by Mallard and the rest of the island's pirate inhabitants.[6]

Jack, renaming his ship "This Albatross" as he fled, vowed he would gain his revenge. Sailing to the Cursed Archipelago in the far southern reaches of the sea, Jack began to rally a massive fleet of ships, with which he attacked any vessel he could find. This angered the Customs and Exise Office, who began a massive anti-pirating campaign that threatened the very survival of most pirates.[7]

Realising they could not survive the constant attacks of the Customs Office and Jack's fleet, the inhabitants of Mos Le'Harmless rallied behind the well-established Gentleman Mallard, who led them to the Cursed Archipelago to eliminate Jack once and for all.[8] 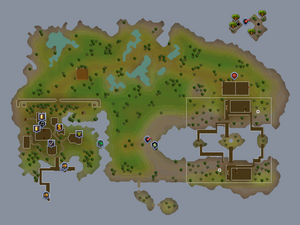 The Battle of the Archipelago[edit | edit source]

Despite his important role in the battle, Mallard is not known to have been present in the attack on This Albatross. The pirates that did manage to board Jack's ship, however, eventually managed to surround Jack, killing his bosun and most of his crew. Cap'n Izzy No-Beard, the first to reach Jack, stated that although Mallard would accept Jack's surrender, the rest of the captains would not, and that he would be executed along with his men.[9] Rather than surrender, though, Jack hurled himself overboard, seemingly committing suicide.

After the battle ended, the pirates of Mos Le'Harmless performed a mass-execution of Jack's entire fleet.[10] Finished, Mallard led them away from the archipelago, where few have since set foot. He would then resume his wandering piracy, although his legend only grew in the telling.

After the Battle of the Archipelago, Mallard continued to hunt his drastically thinned enemies. His death would be quick and unexpected.

Mallard's ship, whilst in a deep stretch of water off the coast of Mos Le'Harmless, was beset by a massive sea monster resembling a kraken or giant squid, called the Leviathan. Despite his best efforts, Mallard was unable to protect his ship.[11]

Even as the ships sunk, Gentleman Mallard remained behind, defending his surviving crew as they escaped on the ship's lifeboats. Mallard himself never boarded one, though, fighting the beast even as his crew began to distance themselves.

Mallard was last seen by his crew as he was dragged into the sea by the creature's tentacles, stabbing at them madly with his rapier.[12] A week later, a massive tentacle was found washed up on the shore of Mos Le'Harmless, a rapier found embedded in it up to its hilt. It was taken ceremoniously by a pirate named Smith, who has since cared for it and told of his tale.[13]