Lizzie was a pirate present at the Battle of the Archipelago, an armed conflict between the fleet of pirate lord Rabid Jack and the united pirate captains of Mos Le'Harmless. Lizzie was killed during the battle.

Following Rabid Jack's failed attack on Mos Le'Harmless, he travelled to the far south of the Eastern Sea, to a cursed chain of islands known as the Cursed Archipelago. Here he docked his ship, This Albatross, and began to gain additional forces and prey on passing vessels. The pirates of Mos Le'Harmless and other nearby islands, still recovering from his attack, launched an offensive in the hope that they could alleviate the aggression of the Customs and Exise Office, who were enraged by Jack's pirating. Lizzie was amongst those pirates in the attack, although her role was not significant.

Lizzie was amongst those that eventually managed to board Jack's ship, where the united crews of Bill Teach and Cap'n Izzy No-Beard were attempting to reach Rabid Jack himself. Lizzie, after slaying one of Jack's guards, managed to reach Jack himself. However, Jack's swordplay easily outmatched Lizzie's, and he killed her. 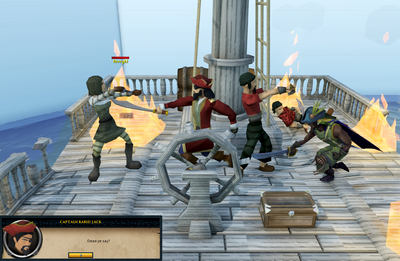 The death of Lizzie.

This information has been compiled as part of the update history project. Some updates may not be included - see here for how to help out!
Retrieved from ‘https://runescape.wiki/w/Lizzie?oldid=35637134’
Categories:
Hidden categories: