From the RuneScape Wiki, the wiki for all things RuneScape
Jump to navigation Jump to search
The Old School RuneScape Wiki also has an article on: osrsw:Mi-Gor
Loading...
NormalHead
Mi-Gor? (edit)

Mi-Gor is an undead pirate general surgeon currently in the service of Rabid Jack, a feared fleet master within the Eastern Sea. Mi-Gor once served as a prominent surgeon for Jack's men, gaining a powerful and respected reputation during the Eastern Sea Civil War. Like most of Jack's crew, he was killed during the Battle of the Archipelago, and has since been re-animated through some type of necromancy.

Mi-Gor and some of Jack's other pirates recently laid siege to the peaceful Saradominist monastery of Harmony Island. After the player intervened in his operations on Harmony Island during The Great Brain Robbery, Mi-Gor was forced to flee and took up a new base in Bloodsplatter Isle, where he began to work with a fellow follower of Rabid Jack, Mechanical Murphy. During A Clockwork Syringe, they are expelled from there as well.

Mi-Gor is believed to be human, although his disguised face makes it somewhat difficult to determine. He is extremely short, standing roughly the height of the average dwarf or gnome. For unknown reasons, his lungs are very weak. In order to survive, he must wear a complicated breathing mechanism which covers his face and chest. He still has difficulty breathing, constantly coughing and wheezing during conversation.

Mi-Gor has yet to be seen in combat, although his frail body, non-combat profession, and heavy breathing apparatus make it unlikely that he is capable of any degree of armed combat. Instead, Mi-Gor uses his surgical skills to create bodyguards, such as the Barrelchest seen on Harmony, effectively bypassing his handicap.

The following takes place during The Great Brain Robbery. 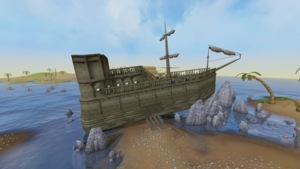 Some time after Mi-Gor's death, presumably in the Battle of the Archipelago, Rabid Jack, whose body had never been found after jumping from This Albatross, secretly returned from the dead. Re-establishing his horde in the uninhabited Cursed Archipelago, Jack somehow revived the majority of his fleet as the undead. Mi-Gor was amongst the thousands revived. 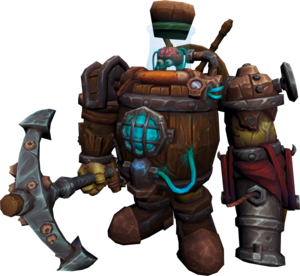 Mi-Gor's first significant action after his revival came in the shape of a brutal attack on the Saradominist monastic settlement on Harmony Island. Harmony, which had long been a peaceful place for pirates to seek penance, possessed no army or defence to repel him.

Mi-Gor's ship ran aground on the north side of the island, from which its crew attacked the monastery and captured the island's populace. Mi-Gor, in the hope of creating intelligent zombies, or perhaps purely for sadistic entertainment, forced a twisted operation upon the monks, removing their still-functional brains from their bodies and transplanted them in animated corpses. The "zombie monks", led by Brother Tranquillity, eventually managed to escape their prison in the abbey, taking up barricaded residence in the island's grainery.

Harmony's central church was heavily damaged in the attack. Blasts from pirate artillery unearthed an underwater tunnel beneath the monastery, severely weakening its foundation and allowing the pirates another method of entry. From here he planned further attacks upon neighbouring islands, particularly Mos Le'Harmless to the north.

Brother Tranquillity, the monks' leader, managed to escape to Mos Le'Harmless, where he gained the support of the adventurer who had solved the situation on Braindeath Island. With the help of the Morytanian Doctor Fenkenstrain, the monks' bodies were returned to them. Meanwhile, the adventurer managed to enter the pirate-controlled church through the underwater tunnel which they themselves had exposed.

The adventurer confronted Mi-Gor, in the church's main hall. Mi-Gor, seemingly unguarded, summoned a monstrosity known as Barrelchest, which he had created by transplanting a brain into a machine. Though his Barrelchest was slain, Mi-Gor himself managed to escape the island, fleeing to Bloodsplatter Isle.

The following takes place during A Clockwork Syringe. 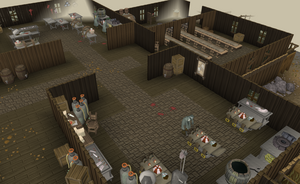 Once he arrives at Bloodsplatter, Mi-Gor formed an alliance with fellow Rabid Jack supporter Mechanical Murphy to create improved versions of Barrelchests, called Mk II barrelchests. One of the new Barrelchests is sent to the player's house in order to kill them, however the player survives the assassination attempt and takes the zombie head of the Barrelchest captive to interrogate it along with Bill Teach in order to find out who had sent him. This leads to Braindeath Island, where Captain Braindeath reports that brewers have gone missing. Their dead bodies are uncovered in a dungeon called the 'Rum'geon, where there are general malpractitioners, minions of Captain Donnie, who was assigned to create an army of mutated crabs, explaining the need for 'rum' the boycot of the factory. Continuing to follow the clues, the player is lead to Bloodsplatter Isle where the factory is uncovered that creates barrelchests as well as many zombie pirate bodyguards, such as attendeads, more general malpractitioners and sado-machinists. When the machines are destroyed, Murphy and Mi-Gor attempt to flee using zomboats, revealing their plan to create a fleet of those and invade Mos Le'Harmless. However, they are pursued by the player and their fleet is sunk. Mi-Gor and Murphy swear vengeance and will likely not be gone for long.

Sometime after being expelled from Bloodsplatter Isle, Mi-Gor was contacted by Rabid Jack to carry out their plan. He is first seen at the top of Rock Island Prison where he is discussing his plans with his master. After this, he was sent to Braindeath Island with Murphy to find out the secret behind Captain Braindeath's 'rum', using his brewers as hostages to reveal the secret. The player arrives on the island and lures crabs from the nearby resource dungeon, using Baron von Hattenkrapper, to assault Mi-Gor, Murphy and their Barrelchest bodyguards. The crabs easily overpower the zombies, including the defenceless Mi-Gor, and he is reduced to a decapitated head. He refuses to willingly divulge the location of his master's base of operations, but he instead unintentionally reveals it, causing him to panic. After the defeat in the brewery, he is being acclimated to his new predicament by the zombie pirate head. According to Captain Braindeath, they are getting on quite well.

Transcripts Mi-Gor is the author or co-author of: