From the RuneScape Wiki, the wiki for all things RuneScape
Jump to navigation Jump to search
Not to be confused with Black ewe or Black ram.
Sheep? (edit)? (edit) 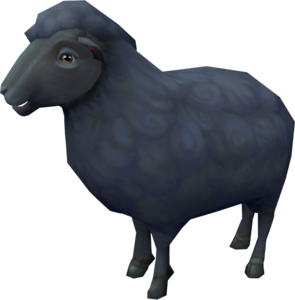 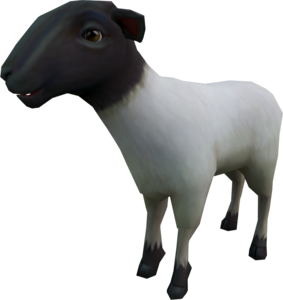 Black sheep are livestock that can be sheared to obtain black wool, which may be spun into balls, and then woven into cloth, used to craft black wizard equipment.

They are significantly more uncommon than white sheep, and may only be found in Fred the Farmer's farm in Lumbridge, and just south-west of the Dark Wizards' Tower near Falador. Fred's farm only has two black sheep (and an unshearable black lamb), and the Dark Wizards Tower has ten, but the latter is also inhabited by aggressive level 22, 35, and 37 Dark Wizards.

Players must shear 20 of them as part of the Sheep Shearer miniquest.

Black sheep were introduced with the 15 December 2009 rework to the Sheep Shearer quest. In the original version of the quest, Fred the Farmer requested 20 balls of wool, which players were able to simply buy from other players without shearing any sheep. The rework of the quest introduced the untradeable balls of black wool and their associated sheep to combat this, ensuring that players had to actually shear sheep to complete the quest.

The 9 October 2017 Free-to-play update made their wool obtainable outside of the quest, and added some to the Dark Wizard's Tower. It also gave their wool an additional use, being an ingredient in crafting black wizard robes. Their wool was later made tradeable, meaning the original reason they were introduced was rendered null.