From the RuneScape Wiki, the wiki for all things RuneScape
Jump to navigation Jump to search
This article is about the boss fight at the start of A Clockwork Syringe. For the NPC seen on Bloodsplatter Isle, see Barrelchest Mk II (Bloodsplatter Isle).

Barrelchest Mk II is a quest monster encountered during A Clockwork Syringe, specifically in a large crate in the player's house. It is an improved version of the Barrelchest, built on Bloodsplatter Isle by Mi-Gor and Mechanical Murphy. During the quest, one is sent to assassinate the player.

The Barrelchest Mk II attacks with melee and ranged. It can also detect Prayer, so if the player was to use Protect from Melee, then Barrelchest Mk II would start using Ranged. It also uses a special attack which knocks the player back and destroys various objects in the player's house (they are later repaired). In addition, it possesses the unique ability to drain a bit of the player's Constitution level. This means that the player's maximum life points will be lowered, and therefore the player will be unable to heal up to their original Constitution level. However, drinking a super restore potion will restore lost levels, and subsequently allow them to heal to full health. 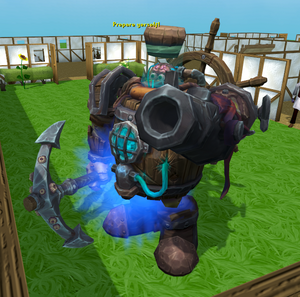 The barrelchest charging its attack.

During the fight, the player's health bar measures the percentage of active Constitution. A player at 50/80 Constitution at or over 500 life points will show a full health bar while the health meter near the minimap will turn from green to yellow. Eating will not heal over the player's current, drained life points. You can safely kill this monster with magic, range or a halberd. The trick is to lure him into a doorway or side of the portal and then turn on the Protect From Missiles or Deflect Missiles prayer, this will however not stop the Barrelchest Mk II from draining your Constitution level. It is possible to take no damage once safe-spotting by trapping Barrelchest Mk II in an east-west doorway and standing east of him on the south of the wall. This places his cannon hand behind the wall and renders it useless. Also, his special attack will blow you back along the wall and he will not be able to advance on you. 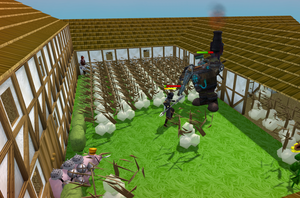 The devastation left by the barrelchest.

When he unleashes his special attack, the Barrelchest Mk II will glow blue, shouting, "Prepare yerself!", and shortly after smash its anchor into the ground, destroying many nearby objects, doors and plants in the house (this includes the exit portal, so an emergency teleport is beneficial), though it cannot destroy walls, which means that hiding behind a wall can give some time to eat and drink potions. The attack will blow you back a few squares, though deal no damage.