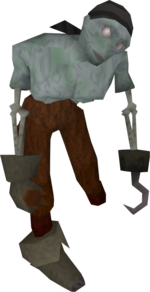 Sado-machinists are found on Bloodsplatter Isle during the quest A Clockwork Syringe. They are minions of Mi-Gor, and are called to do his bidding near the end of the quest when the player reaches the room with the conveyor belts and lever.