Jed, "The Iron Link", is a slaver from the Eastern Lands, specifically Waiko, who lures his victims to his ship with promises of wealth and travel, overpowering and restraining them once they arrive. He was the culprit behind various kidnappings in Meg's cases. Following the thwarting of his plans by an adventurer and local bartender Zambo, he escaped from his ship but subsequently stole another one from Trader Stan.

He returned and launched the Port Sarim Invasion with the Skulls slavers, attempting to take the prisoners held in the Port Sarim Jail, watching the events from his ship off the coast of Port Sarim.

His final escapade involved using a cyclops he saved from death, Cap'n Ekahi, in an elaborate attempt to murder the player while transporting a moai between Aminishi and Waiko. When Ekahi and his goons were defeated by the player, Ekahi vowed to aid the player in locating Jed. After lengthy preparations, the adventurer and their crew confronted Jed on his ship at the rendezvous point, where Jed was attempting to sell his prisoners to an ominous ship aptly named The Harbinger, which Ekahi claims would be "worse than death". After some heated words, Jed leaps off his boat into the waters below to escape the player, only to be eaten by the Thalassus mid-jump.

During Eye for an Eye, it is revealed that Jed was 'rescued' by The Harbinger and was interrogated and tortured for failing to bring back his slave quota, and was zombified as a result, being turned into Undead Jed. Jed feigned being a defective undead so he could escape when the time was right, and fled to Cyclosis to enact revenge against Ekahi, who had betrayed him. 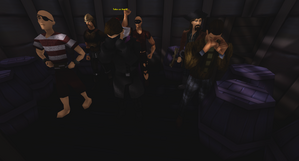 Some of Jed's victims, imprisoned his stolen ship. 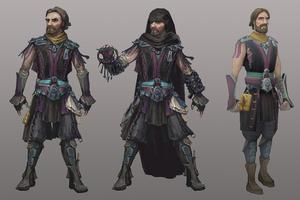