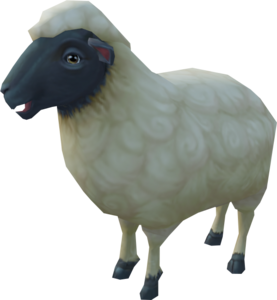 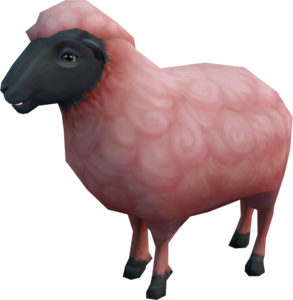 Sick-looking sheep (1) are sick sheep found near the East Ardougne north bank that must be prodded with the cattleprod to the sheep pen and fed the poisoned sheep feed during the Sheep Herder quest. Its wool is slightly reddish.

After Mourning's End Part I, the sheep are of a darker red as a result of the player dying them with a fixed device loaded with a red toad. Once dyed, they can no longer be prodded or interacted with in any way. Luckily, players only need to dye one and all the sheep of the same colour turn dark. This is how players can tell they haven't missed the sheep during the quest.

This information has been compiled as part of the update history project. Some updates may not be included - see here for how to help out!
Retrieved from ‘https://runescape.wiki/w/Sick-looking_sheep_(1)?oldid=35892051’
Categories:
Hidden categories: