From the RuneScape Wiki, the wiki for all things RuneScape
Jump to: navigation, search
This article is about the book. For other uses, see Phoenix (disambiguation). 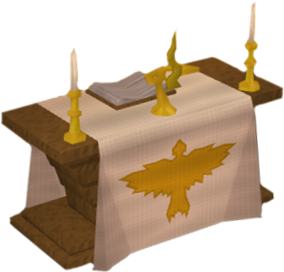 "The Phoenix" book on Phoenix Shrine

After completing the quest, it is learned that the Priest of Guthix outside the cave is Brian Twitcher.

The following text is transcluded from Transcript:The Phoenix.

I have devoted much of my life to the study of this wondrous creature: the firebird of legend, the phoenix. I placed this book and the shrine it rests on in the phoenix's roost, shortly after it departed on one of its many long absences from its lair. I will no doubt be continuing my research until the phoenix returns for its rebirth. Unfortunately, based on my research, this event will not occur until I am fully five decades older, and will no doubt have became a frail old man, unable to travel and see the event I have waited a lifetime to witness.

I leave these records of my findings inside the phoenix's lair in the fond hope that you, dear reader, will read them, and come to understand and admire the phoenix as I do and will all my life.

The phoenix is a large avian creature. In terms of physical appearance, it is similar to a very large eagle, only with fiery feathers almost all over, and a crest atop its head. The only part of it that is not fiery oranges and reds is its tail - its long, beautiful tail. The magnificent tail feathers are a burning red toward the base, and the colours grow gradually cooler towards the tips of the feathers, flowing from red to orange to yellow to green to a cool blue. The phoenix is truly a magnificent sight to behold.

My knowledge of the creature is little more than observations of its behaviour; I kept myself concealed during my research, partially to avoid startling or upsetting the phoenix, but mostly out of a human fear of death after witnessing some of its powerful magicks.

The phoenix spends most of its time away from its lair (one of the main reasons I have been able to examine its roost chamber as much as I have!) and seems to return when there is an abnormal occurrence or problem within the lair. I have a theory as to how the phoenix does this, and I shall explain later in this book.

The phoenix's magicks include the incomprehensible ability to revive the dead. Creatures it revives became servants to the phoenix, and spend their days in its lair. These are described in the next section, "The Reborn". The magic it has over life and death, coupled with evidence "liberated" from the phoenix's roost, lead me to believe that the phoenix is an ancient creature to whom the laws of life and death do not apply.

I discovered several items in the phoenix's roost that looked out of place, and took them to an antiques expert to be appraised.

They all turned out to be ancient jewellery. The expert put these items into batches, according to age, and each batch was separated by some 500 years, with the oldest being thousands of years old. The newest set of artefacts was apparently hand-crafted by some legendary jeweller precisely 450 years ago. From the evidence, I postulate that the phoenix returns to its roost every 500 years for a specific purpose, and I believe this purpose is the key to prolonging its life.

Additionally, from the evidence, I deduce that this 500-year cycle is set to repeat 50 years from now.

These reborn, now plentiful in number, serve to protect the lair from those who would desecrate it in the phoenix's absence. I have also witnessed them tending to the eternal trees.

The method through which the phoenix revives these men is unknown to me; I witnessed the event only once, from a difficult vantage point in order to remain concealed. Some poor fellow chanced upon the cave during a storm, and came inside seeking shelter. He made the grave error of trying to cut down one of the eternal trees to build a fire. From my hidden vantage point, I could only watch as the reborn set upon him. The battle was not long; the man was outnumbered and outmatched.

The fallen warrior was taken into the phoenix's roost and placed upon a large stone symbol on the floor. The symbol began to burn, and the phoenix rose up through it, burning the body to ashes. Moments later, the ashes began to glow white-hot and ebbed and flowed before my very eyes. A short time later, the molten ashes had formed the vague shape of a man. The molten ash creature then defied death and rose to its feet. The equipment the adventurer had brought in with him was melted down in the cave's natural lava and smithed into a large weapon. This and a set of armour carved from rock was used to arm him. He then set about the same tasks as the other guardians, with a seemingly innate knowledge of exactly what to do.

The magicks behind this completely baffle me. Unfortunately, that is the limit of my knowledge of these reborn. All attempts to make contact with them have thus far proved fruitless; they aggressively defend the phoenix's lair from intruders. I have noticed that, at night, they are more relaxed and passive, requiring more provocation than simply my presence in the cave.

Perhaps their activities are linked to the conscious state of the phoenix itself; they could be a kind of gestalt entity - not several individuals, but parts of a single being?

This is just my speculation, but the evidence suggests there is, at the very least, an awareness between the phoenix and its thralls.

At varying depths inside the barren and harsh phoenix's lair, I was shocked to find small areas suitable for vegetation. In each of these areas was always a tree. During my delvings into the phoenix's lair, I have thus far come across five different species of tree. I have taken samples of the twigs and had them analysed by an expert in herblore. He tells me they are of no alchemical value, and are usually burnt purely to release aromas. He identified my samples as having come from the trees cinnamon, sassafras, ailanthus, cedar and mastic.

You may well wonder why this section is headed 'The ETERNAL Trees' and, dear reader, it is your right to do so. I refer to these trees as eternal due to the fact that, as long as the phoenix lives, these trees will stay inside its lair.

During one of my sojourns into the caves, I came upon a diseased tree. I kept this tree under observation until one of the reborn discovered it. Once it had been discovered, it was but a few days until the phoenix returned to its lair to attend the scene; this further enforces the theory of a joint consciousness between the phoenix and its thralls, as the phoenix had no way of knowing this tree was diseased. What I witnessed next was a true show of this magnificent creature's ingenuity; it burnt the tree to ashes and a fresh sapling was born from the remains.

The effort the phoenix goes through to keep these trees close at hand is nothing short of remarkable, and it would suggest that they are of great import to the phoenix. I have observed some of the guardians with covered hands, pruning twigs from the trees and working them into a ribbon of wood with a knife. I have also discovered some large woven baskets in the phoenix's roost. I believe they play a part in some kind of ritual that the phoenix performs, as I discovered the burnt remains of twigs from the five eternal trees, near what appears to be the base of a funeral pyre in the roost.

Could this ritual be the secret behind the phoenix's seeming immortality?

Could it be that the phoenix returns to its roost to burn to death and be reborn?

Is its natural cyclic, rather than eternal?

Only time will tell. In five decades, I will return to the lair and observe from the shadows whatever it is the phoenix does. In the meantime, I will continue with my research and hope that this book is read and, when that day comes, 50 years from the time of writing, I am still fit and well enough to return to this place and witness the event that occurs once every five centuries.