From the RuneScape Wiki, the wiki for all things RuneScape
Jump to: navigation, search
This article is about the pet. For the boss, see Phoenix.
Loading...
CuteMean

Phoenix egglings are pets introduced with the In Pyre Need quest. They come in cute and mean varieties, depending on how you hatch them. To obtain either of them you must have completed the quest In Pyre Need in order to gain access to the Phoenix Lair Distraction and Diversion. The phoenix pets are one of the possible rewards. These pets do not have an adult form, and they can be fed ashes.

When leaving the Phoenix Lair with "Exit" option after defeating the Phoenix, there is a 1/100 chance of getting lost if certain conditions are met.[1][2]

You can have one of each type of pet phoenix. 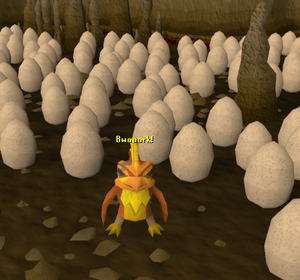 A newly hatched phoenix among all the unhatched eggs.