From the RuneScape Wiki, the wiki for all things RuneScape
Jump to navigation Jump to search
For the achievement, see In Pyre Need (achievement).

In Pyre Need is a quest which introduced the phoenix Summoning familiar and phoenix eggling pets. Upon completion of this quest, players gain access to the Phoenix Lair, a daily distraction and diversion (D&D).

Talk to the Priest of Guthix, located at a cave entrance, south-west of the Piscatoris Fishing Colony to start the quest. The cave is located north-west of a fairy ring, code akq. You can also teleport to Eagle's Peak on the Lodestone Network then travel north.

The priest explains how the phoenix residing within the cave is reaching the end of her five hundred year lifespan. To ensure her survival, a Ritual of Rebirth needs to be performed, but because the phoenix is gravely injured, she's too weak to perform the ritual herself and requires the player's help.

The priest says that he is also too old and weak to help the creature, but knows how to perform the ritual to save her life.

You will need secateurs, a knife and a tinderbox if they are not on your toolbelt. The Priest of Guthix will provide whatever items you do not have after accepting his offer.

After going through all the chat options enter the cave.

There are 5 caves, and each cave contains 1 tree, located in the light green spots of each cave. The entrance to the next cave is marked in red, as a door/exit, on the minimap. If you leave and then return, the location of the trees may change. Remember that you cannot proceed into the next cave until you have harvested the twigs.

The Ritual of Rebirth[edit | edit source] 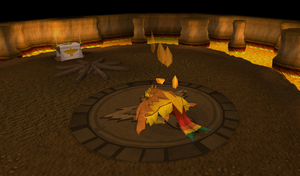 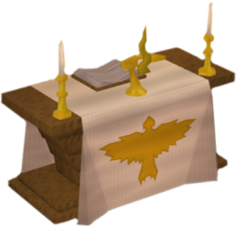 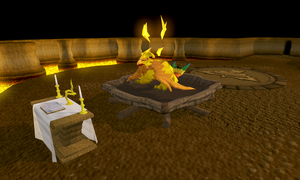 Proceed through the caves, and use the "Harvest-twigs" option on the trees. In all, you need to obtain 5 twigs, one of each kind:

Upon arrival at the final cave, you'll see the wounded Phoenix.

In this cave, there is an incomplete pyre, and a shrine containing a book, The Phoenix, written by the Guthixian priest Brian Twitcher. The book contains his notes following years of studying the Phoenix, however, it's not needed to complete this quest.

Use the "Fletch" option on the twigs, or alternatively click "Craft" on the pyre, to turn them into their respective weaving ribbons:

Use the weaving ribbons with the pyre or use the "Craft" option on the pyre. A cut-scene will show the Phoenix moving onto the pyre.

Click "Light" on the pyre. If the tinderbox is used on the phoenix, she politely reminds you to light the pyre instead (light the pyre, not me!). A cut-scene will show the phoenix burning, then turning into ash. The phoenix is then reborn.

Talk to the reborn Phoenix, and she will explain everything and thank you. She will give you 5 phoenix quills and the ability to challenge her in the future. Leave the cave, and talk to the Priest of Guthix to finish the quest. 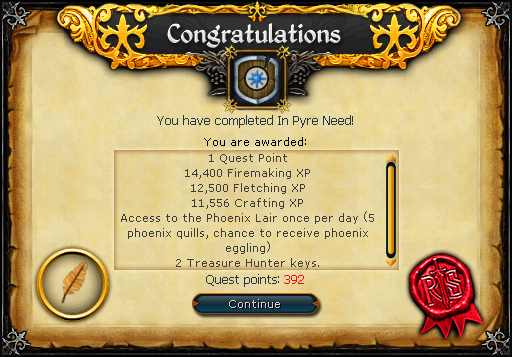 In Pyre Need is not currently required for any quests or miniquests.