Creature of Fenkenstrain is an intermediate quest where you become the assistant of Dr Fenkenstrain and slowly uncover the history of the Lordship of the North Coast.

Dr Fenkenstrain, master and sole occupant of the castle to the north east of Canifis, needs a new servant to go on a dark errand for him.

Do you have the stomach to help Fenkenstrain pursue his twisted purpose? 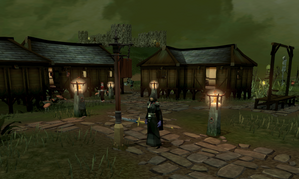 To start the quest, read the signpost in the centre of Canifis. After you've started the quest, go northeast to Fenkenstrain's Castle. Talk to Dr Fenkenstrain and a job interview will commence. When asked to describe yourself in one word, answer "braindead" and that your best skill is "grave-digging".

Dr Fenkenstrain hires you and you will receive a mission to retrieve 5 body parts in any order: 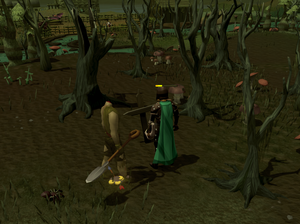 The gardener ghost leads you to his grave.

Wear your ghostspeak amulet and talk to the headless Gardener Ghost at the back of the castle. If you ask him what happened to his head, he will explain that it got chopped off while he was digging a grave in the Haunted Woods. You will then ask him to show you where the place was, and he will follow you for ten minutes. You can talk to him while in the woods and he will direct you toward his grave. You may also ask for his name, which you will use to identify his grave and retrieve his head, which he reveals to be Ed Lestwit. The gardener ghost will stop following you if you wander too far off, log out, teleport, or die. You do not need the ghost to follow you in order to find and dig at his grave. It is recommended to wear a Holy symbol to weaken nearby Feral vampyres.

Head to the grave pictured. It's located slightly south-east of fairy ring ALQ. Make sure the grave's name matches the ghost's, and dig by right-clicking the grave. You will receive a decapitated head.

Go to the bar in Canifis. You can either ask the bartender Roavar for something to eat and he will sell you a pickled brain for 50 coins, or tele-grab a brain on the table (and complete the Brain Bending Morytania achievement in the process). Attempting to grab the brain off the table will also prompt Roavar to sell you one. Use the brain on the decapitated head. 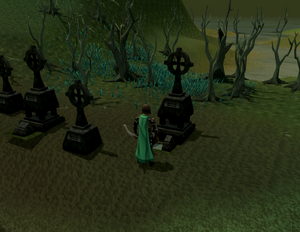 A grave opens a dungeon! 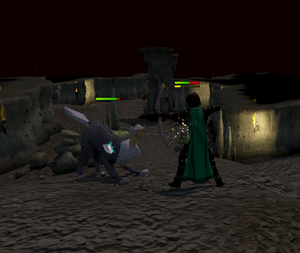 Upstairs in Fenkenstrain's Castle, there are bookcases on either side of the floor. Search the bookcase in the west room for The Joy of Gravedigging and you will find a marble amulet. Search the east room's bookcase for Handy Maggot Avoidance Techniques and you will find the obsidian amulet. Use them with each other to get a star amulet.

Exit the castle and head east, to some tombstones near a musician. Use the star amulet on the eastern-most tombstone with the indent on it. Push the tombstone to enter a dungeon which contains various Experiments. Kill one of the level 35s to get a Cavern key – the ones that look like a wolf with a female head, as the others don't drop the key.

Once you have the key, follow the northern tunnel to a gate and unlock it. You need to then get another cavern key by searching the chest at the bottom of the ladder. Go up the ladder, and dig at the three tombstones and you unearth all of the remaining parts. Go back to the castle. You can also use the Canifis lodestone. 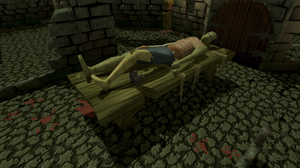 Ready for a little juice... 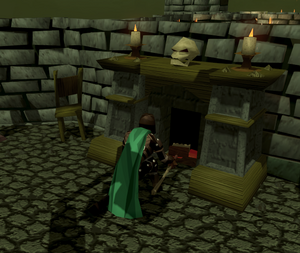 Using the extended garden cane to obtain a conductor mould.

Hand over the body parts to Fenkenstrain and he will ask you for a needle (obtainable from the general store in Canifis) and five spools of thread to sew the body together. Give them to him to receive yet another assignment – fixing the lightning rod – as Fenkenstrain notes that having a complete body is not all that's needed to bring the body back to life, and that he needs lightning to complete his plan.

Equip the ghostspeak amulet and ask the Gardener Ghost for the shed key. Go inside the shed and search the cupboard for a Garden brush. Outside the shed there will be a pile of canes. Take three garden canes. Use them on the brush and attach them with your 3 spools of bronze wire. This will extend it, making it suitable for chimney sweeping. Make sure you use all three canes on the same brush, it requires multiple canes to extend the brush. The icon of the brush will not change, but the examine text will.

Go upstairs and use it on the west fireplace (in the room where the marble amulet was) to get a conductor mould. 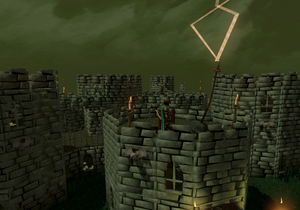 Invoking the conductor with lightning

Once you have the mould, you need to go to a furnace. Unlock the Canifis lodestone if it hasn't been unlocked yet, to make the return trip faster. The nearest furnace is in Port Phasmatys, which requires completion of Ghosts Ahoy or 2 ecto-tokens to access. Otherwise, the furnace in the first building to the west of the Al Kharid lodestone is quickly accessible.

With a silver bar and the conductor mould in your inventory, you should see an option (under silver casting) to create the conductor. Do so, and return to the castle.

Take the stairs up to the 1st floor[UK]2nd floor[US], go to the room furthest south and climb the ladder to the roof. Click on the lightning conductor to fix it. Lightning will instantly strike and the monster comes to life! 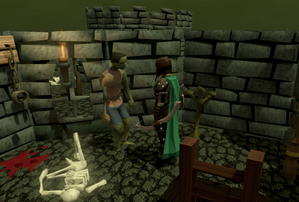 Talk to Dr Fenkenstrain again. He will tell you that the monster tried to kill him, so he locked it in the tower. He will give you the tower key and tell you to kill the monster. Go back upstairs, and use the key to unlock the tower door. Climb up and talk to the monster.

Upon talking to the monster, you realise it doesn't seem dangerous at all. It introduces itself as Lord Rologarth, the owner of the castle, of which Fenkenstrain was the doctor. Rologarth shamefully tells you about how Fenkenstrain convinced him to sell his subjects to the vampyres, and wants you to stop Fenkenstrain from performing any more evil experiments. Go back to the ground floor[UK]1st floor[US] and pickpocket Dr Fenkenstrain to steal his ring of charos. 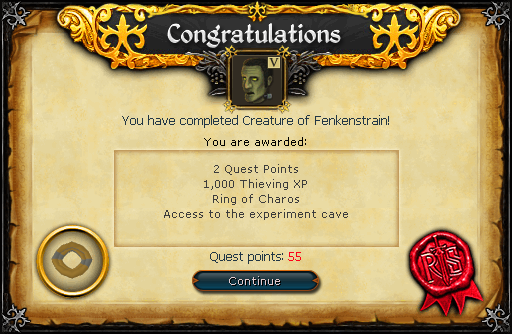 Creature of Fenkenstrain is directly required for the following quests/miniquests: