From the RuneScape Wiki, the wiki for all things RuneScape
Jump to navigation Jump to search
Item JSON: {"edible":"no","disassembly":"no","stackable":"no","stacksinbank":"yes","death":"alwaysinclwild","name":"Key token","bankable":"no","gemw":false,"equipable":"no","members":"no","id":"24154","release_date":"4 February 2014","restriction":"microtransaction","release_update_post":"Treasure Hunter","lendable":"no","destroy":"Are you sure you want to destroy this token? You cannot reclaim it.","highalch":false,"weight":0,"lowalch":false,"tradeable":"no","examine":"This token will add one Treasure Hunter key to your collection.","noteable":"no"}

A key token is an item that can be used to give a player one additional key on Treasure Hunter. They are obtained randomly while training skills or killing monsters and through various once-off methods such as quests. Key tokens replaced spin tickets when Treasure Hunter was introduced.

A key token may only be claimed once, after which the ticket is destroyed and another must be obtained. Another key token may be obtained even when another exists in the inventory without a known maximum. Key tokens cannot be deposited into a bank nor can they be alchemised. If the player earns a key token with a full inventory whilst skilling, it will either be claimed automatically (if this option is toggled and you have less than 10 earned tickets) or be placed on the ground, prompt a message, and a golden beam will shine over it. As Ironman accounts cannot play Treasure Hunter, they cannot receive key tokens by any means.

Following an update on 27 May 2014, using a key token will present the player with an interface giving them the option to automatically consume key tokens when they are received. Players may not claim more than 10 extra keys earned via gameplay at a time; however, a player can have more than 10 extra keys if they are earned through other methods such as quests, daily challenges or through the oddments section of the Marketplace. 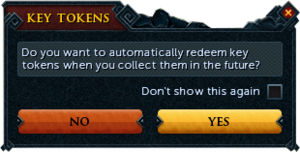 The interface displayed when using a key token

Key tokens are obtainable as a rare drop from the vast majority of monsters, notably excluding all Dungeoneering monsters. They are also obtainable from any skilling activity that can produce strange rocks for the Shattered Heart Distraction and Diversion, as well as Divination. When receiving a key token, the following shows up in the chatbox:

Congratulations! You've earned a token for a Treasure Hunter key!

If 10 or more keys are already owned and there is no space in the inventory, it will drop to the ground, prompting the following message:

You do not have enough space in your backpack. Check on the ground for your key token.

Players are able to earn extra keys while playing without being given a token. Completion of any quest will earn the player 2 free keys. Members are given the opportunity to earn up to 3 keys each day by completing daily challenges through the Challenge System. Every month members are able to earn a free key token by starting a game of Troll Invasion which can be played a second time per month for a second key token using a Monthly D&D Reset.

Each Wednesday, a different Distraction and Diversion grants players a free key token. Simply participating in the D&D is all that is required; chopping at an Evil Tree, mining a crashed Shooting Star, spying a penguin, and participating in Circus activities - rotating each week in that order.

D&D of the week

Key tokens are a universal drop, which means they are able to be obtained from any monster in the game. A few exceptions apply:

This information has been compiled as part of the update history project. Some updates may not be included - see here for how to help out!
Retrieved from ‘https://runescape.wiki/w/Key_token?oldid=35821232’
Categories:
Hidden categories: