From the RuneScape Wiki, the wiki for all things RuneScape
Jump to navigation Jump to search
Not to be confused with Dimension of the Damned.
For the achievement, see Dimension of Disaster (achievement).

For the quick guide to the replay reward after completing the quest, see Dimension of Disaster/Quick guide/Efficient Replay Guide.

Dimension of Disaster is RuneScape's 200th quest. It features an alternate universe where the player character never existed, changing the course of history in Gielinor. It has no skill requirements to start, however the required completed quests do have skill requirements. The quest takes place in an alternate-reality version of Varrock called New Varrock, during year 170 of the Fifth Age. It consists of five subquests similarly to Recipe for Disaster. These include an introductory quest and "twisted" versions of existing quests, namely Shield of Arrav, Demon Slayer, Defender of Varrock and The Curse of Arrav, with the latter requiring completion of all the former to start.

Players cannot bring any of their own items into the quest, and there is no bank or Grand Exchange, meaning players will have to create or purchase their own equipment to complete the quest. Like Broken Home, it is replayable, with some additional rewards available for doing so.

Players can start the quest, start a replay of the quest, and reset the quest by talking with Aris in her tent at the south-west corner of Varrock square.

Have you ever stopped to think what would happen if you did not exist? In a pocket dimension of Varrock - an alternate reality - you were never born, the Sixth Age never happened, and the villains you would have defeated rule with impunity.

In this reality, Varrock has suffered greatly over the past year; its citizens massacred when the demon Delrith was summoned by Denath. Shortly thereafter, the city was conquered by the Mahjarrat necromancer Zemouregal's horde of armoured zombies.

Zemouregal has since corralled Delrith behind a demonic ward in the south-east corner of the city, and raised any Varrock citizens who are still reasonably intact as zombies.

Can you find your way into this dimension and overthrow the villains once more?

Coin of the Realm[edit | edit source]

Main article: Dimension of Disaster: Coin of the Realm

The quest may be started by speaking to Aris in her tent in Varrock Square. This will start a short introductory subquest, which is required to complete all other subquests.

After completing the first subquest, you will arrive in New Varrock, an alternate version of Varrock under the control of the Mahjarrat Zemouregal. It is wholly separate from the rest of the game, and you cannot bring any items in. Thus, you will have to make most items yourself, either using items gathered or bought in shops with zemomarks, the currency of New Varrock. Alternatively, you can trade with other players.

During the quest, a new task set, the New Varrock Tasks, may be completed for Tiny Zemouregal for additional rewards. These are saved between quest resets.

Four subquests must be found and completed in order to finish the quest.

After completing Curse of Arrav, you will have freed New Varrock from Zemouregal's control and will be returned to standard Varrock. For replays, do not select "skip" from the right-click option when talking to Aris as this will result to obtaining zero silver pennies. Speak to Aris, and she will congratulate you, tell you some statistics, and give you some additional rewards.

Aris tells you about a vision of the world where the player rules over it. The outcome is determined by the number of killed zombies and times of success stealing from zombies, but not counting any of non-human and armoured zombie variant. These numbers are reset when a replay is started. The vision shows the citizens are richer when less stealing actions were done, and the world is more just if less zombies are killed. The vision dialogue is only for show and does not affect anything in the game. 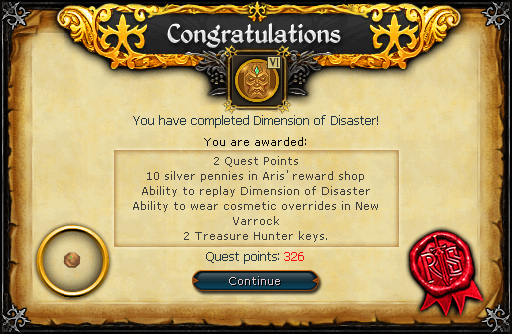 Dimension of Disaster is not currently required for any quests or miniquests.

The Dimension of Disaster is a dimension where the player never existed, thus the world of Gielinor went through a quite different timeline. As the player never existed, they never inspired Jack to become a righteous person. Instead, Jack became a malevolent and powerful sorcerer who terrorized the inhabitants of Gielinor. Guthix finally felt that he couldn't stand by any more and killed Jack to end his reign of terror. When Seren discovered that Guthix had killed a mortal, she was horrified and thus rejected Guthix's offer to come to Gielinor and remained on Tarddiad with her elves. Slightly embittered by Seren's refusal, Guthix went to sleep at the end of the First Age. Without Seren's light to subconsciously guide him, Zaros never arrived on Gielinor, and as Zaros never came; the hydra-god Loarnab was free to terrorise its surroundings.

Loarnab increased in power, gained intelligence, discovered demonic magic and used it to build an empire around itself. The Desert Pantheon was threatened by Loarnab's forces, when Icthlarin managed to bring the Mahjarrat with him to fight against them. The Mahjarrat betrayed Icthlarin and the rest of the history repeated itself with Loarnab basically filling Zaros' place as the Dark Imperator, even including the creation of a creature called Nex (made from dragons, virii, hydras and Mahjarrat) and Zamorak rebelling against and slaying Loarnab with the Staff of Armadyl.

Zamorak's rise to power started the God Wars, which raged for centuries, until Guthix awoke. Guthix, however, was not as reluctant compared to our dimension due to his embitterment and directly attacked the warring gods - Zamorak, Saradomin, Armadyl and Bandos, siphoning off a great deal of their power and energy, scattering it across the world before banishing them. Guthix then returned to sleep, not to be heard from again. However, Bandos managed to maintain a presence in Gielinor, having successfully possessed Zanik as his Chosen Commander. The Chosen Commander eventually defeated the other warring factions by seizing all pieces of the Godsword, reforging it and using it against them. In her victory, she opened the doors to the Ancient Prison, revealing Nex, who instantly killed Bandos' avatar.

During the last years of the Fifth age the player completed various quests to ensure the safety of the Kingdoms of Misthalin and Asgarnia, but without their existence the kingdoms' history became another. Guthix was never assassinated, so the gods never returned to Gielinor and the Sixth Age never began. Without the player's assistance in finding the heir to the Shield of Arrav, Zemouregal conquered Varrock, killing almost all of its inhabitants, reviving them as zombies. He also killed any hero who dared to oppose him.

Tolna's rift was never cleansed, thus allowing the horrors of Tolna to infest and corrupt most of the Misthalin underground.

The Kinshra gained control over Falador and exiled the White Knights. The trolls were eventually able to overrun the Burthorpe Imperial Guard and went on a rampage in both Burthorpe and Taverley. Count Draynor eventually regained his strength, and he turned most of the population of Draynor Village into vampyres. Amascut's plans went on unhindered, and she was able to conquer the desert and all its inhabitants, having her minions patrol the city of Al Kharid.

As several of the Mahjarrat interacted with the player in some way, they too were also affected in this dimension. Azzanadra was never freed from his prison, Jhallan remained hidden, Akthanakos was eventually captured, Wahisietel was sacrificed in the 18th Ritual, Kharshai attempted to attack New Varrock with the Fremennik but failed and Enakhra disappeared into the desert, shortly after Akthankos' capture after rejecting Zemouregal's romantic advances. Like in our dimension, Lucien was killed by the dragonkin, this time led by Kerapac, and Sliske sought out the Stone of Jas and the Staff of Armadyl following Lucien's demise. Hazeel was revived by his cult, with the assistance of Philipe Carnillean, who had become snobbish as the player had never opened the world of adventuring to him. Hazeel later managed to recapture Ardougne and became king of Kandarin. 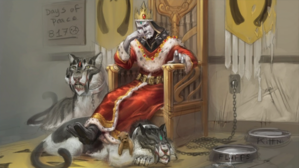 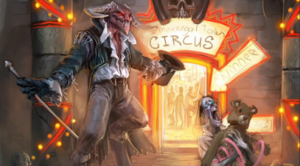