From the RuneScape Wiki, the wiki for all things RuneScape
Jump to: navigation, search
The Old School RuneScape Wiki also has an article on: osrsw:Jail key
Jail key? (edit)

The jail key is dropped by the jailer, found in the Black Knights' Base, deep within Taverley Dungeon. The key gives access to the jail cell containing Velrak the explorer, who will in turn give players the Dusty key which may be used to travel deeper into the dungeon. It can also be used to unlock the door that holds two dwarves, opposite to Velrak the explorer's cell.

The jail key is not required for exiting the cells.

This key cannot be added to the key ring. 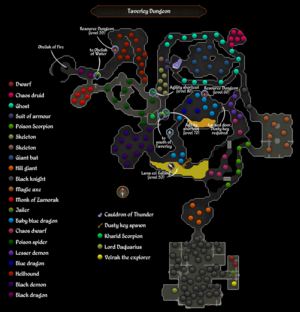 Click to view a larger version (opens on a new page)
Retrieved from ‘https://runescape.wiki/w/Jail_key?oldid=26065912’
Categories: