From the RuneScape Wiki, the wiki for all things RuneScape
Jump to navigation Jump to search
The Old School RuneScape Wiki also has an article on: osrsw:Pharaoh Kemesis
This article is about the ruler of Menaphos. For other uses, see Pharaoh (disambiguation).
Loading...
Outside combatIn combat 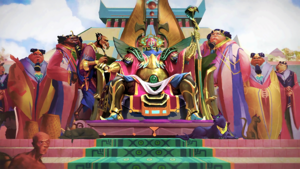 The Menaphite Pharaoh on his throne

The Pharaoh was the ruler of Menaphos prior to his death during the events that happened in 'Phite Club. He was considered by non-Menaphites to be greedy and cruel.[1][2] He appeared to hold little regard for religion, employing men willing to open fire on religious leaders.[3] He ruled through fear and employs a vast spy network to suppress dissent.[4]

The Pharaoh was the son of an unnamed female Pharaoh who Osman regarded as a militant and petty ruler. His ancestors had overthrown the true heir, Osmumten, during the Kharidian–Zarosian War when Tumeken sacrificed himself to save the Kharidian Lands. They did not understand the sacrifice Tumeken had done to protect them, and redirected this anger to Osmumten. They were unable to locate Osmumten's son however.

As a result, the Pharaoh's ancestors ruled Menaphos.

When the Pharaoh's mother died, he immediately succeeded her. She was not popular with the people, but the Pharaoh worked many years to undo all the sins she had done.

At an unknown time, a group of Amascut devotees attempted to overthrow the Pharaoh, but failed. They were subsequently exiled from Menaphos and retreated to Pollnivneach to regroup for another attempt.[5]

During the Fifth Age, Menaphos was at war with Al Kharid but the Pharaoh, then a worshipper of Apmeken, declared a fragile peace with Emir Shah.[6] Amascut, furious at the cessation of hostilities, dealt with the Pharaoh accordingly by corrupting him when he prayed to the Pantheon to help him in his rule. [7]

When the Emir fell ill and his son Ali Mirza went missing in 169, Jabari, a Menaphite ambassador and thrall of the Devourer sent to Al Kharid demanded stability, even if that meant putting a Menaphite on the throne, even temporarily. The offer was rejected, with Al Kharid's spymaster Osman suggesting the Pharaoh was involved in the kidnapping of the Prince.[8] The Emir believed that Menaphos would declare war should he die without Ali to take up the throne, though the prince was later recovered.

When the neighbouring city of Sophanem became infested by plagues, the Pharaoh ordered the gates between the cities sealed, quarantining the city and restricting the movement of Sophanites. Attempts to establish contact between the cities have been violently repelled by Coenus, the vicious Captain of the Menaphite Guard. Upon hearing the slaves of Sophanem had been temporarily relieved of their duty following the quarantine, the Menaphite slaves rose in rebellion, although Coenus and his men managed to harshly subdue the revolt in the imperial and merchant districts.

Sometime ago, during a riot, the Menaphite guards captured Batal. To ensure no more workers would riot, the Pharaoh had Batal's hands cut off to make him an example of what would happen if he was defied again.

According to rumours, the Pharaoh is not planning on opening the city gates soon - the opposite, if anything.[9]

The following takes place during The Jack of Spades.

Following negotiations with Al Kharid, the Pharaoh decided to invite an adventurer who had helped Al Kharid out and Grand Vizier Hassan to the city for negotiations. He was still working with Amascut, though he did not know of her true identity at the time. He warned Jabari that he was taking a big risk inviting outsiders to the city, having numerous problems of his own - the Jack of Spades, civil unrest and usurpers everywhere. He had the guards watch their guests at every turn, as he did not want anyone to defy his rule.

The adventurer, tasked by Senliten to discover why the crocodiles were aggressive, found Crondis's temple and an unusually demanding goddess, contrary to what they had been told. Upon doing numerous tasks for her, they became irritated by her unreasonable requests, which in turn made her so angry that she spat out a Ukunduka, corruption Amascut had put into her. They defeated the Ukunduka, causing Crondis to return to normal. Amascut soon became aware of this and informed Jabari, who in turned informed the Pharaoh. In order to keep the people of Menaphos fearful, he decided to take Jabari's advice on paying the local bandits and thugs to keep the people inside Menaphos.

Upon Jabari's defeat by the adventurer and Het in the Duel Arena, the Pharaoh demanded to know where Jabari was, and started becoming mad, stating that he would become a god and he would have a massive impact on the world.

The Pharaoh had numerous attacks at his disposal, and during the fight, his mask broke off, revealing corruption in his face. The adventurer eventually defeated the Pharaoh, who conceded. He revealed that Amascut had corrupted him early in his rule, and wished to atone for his sins. The adventurer had the option of either enslaving, imprisoning, exiling or executing him, but before they could pass judgement, Osman came in and stabbed the Pharaoh with his dagger, killing him.