From the RuneScape Wiki, the wiki for all things RuneScape
Jump to navigation Jump to search
For the achievement, see Stolen Hearts (achievement).
Not to be confused with Heartstealer.

Ozan's in Draynor Village, looking for an old friend who's fallen into bad company. You'll join Ozan as you infiltrate the Draynor underworld, meet an old flame, and become caught up in a kidnapping plot of princely proportions that leads back to Al Kharid – the home from which Ozan was banished years ago.

Traverse the rooftops of the gloriously reworked Al Kharid to steal the mother of all diamonds, and confront the kidnapping villains. You may find, though, that the intrigue runs deeper than you or Ozan ever suspected... 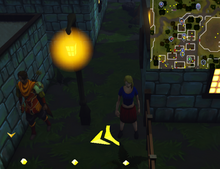 The location of Ozan

To start the quest, speak to Ozan in northern Draynor Village. He can be found next to the house with a trapdoor, just south of the potter. He says that he has heard of your adventures and would like your help in one of his own.

When he was growing up in Al Kharid as an inexperienced thief, he became good friends with Khnum, a palace guard. As he became older and more reputed for his thieving skills, Ozan was caught and banished from the city for breaking into the palace, after which he lost touch with everyone in Al Kharid, including Khnum.

Years later, Khnum has now apparently joined an up-and-coming gang who have set up base in Draynor Village. Ozan suspects that his friend, a peace-loving character, is getting involved in something that he cannot deal with on his own.

As Khnum is avoiding Ozan, the master thief suggests you pose as a thug interested in working in a gang, and find out if Khnum is safe. The gang, named The Skulls, gather in the cellar of the adjoining building.

The Skullery, the local haunt of the Skulls.

Try to enter through the trapdoor in the building, only to be stopped by the bouncer; threaten him and he will let you in. Talk to Khnum about getting recruited into the gang, which he is the leader of. To become a part of the gang, he wants you to tell him how you would react to certain 'hypothetical' situations.

There are no wrong answers, although each response will decide what title you may get at the end of the quest.

Once he is satisfied with your responses, he officially recruits you into The Skulls. On asking him about the gang's works, he tells you that three of his best men are out performing a kidnapping, and that he can't spare any more details. Khnum tells you to meet him up in the gang headquarters for a job, although refuses to tell you its location. He wants you to find it on your own, proving to him that you are indeed Skulls material. 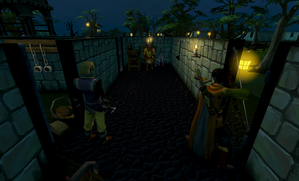 Khnum is not going anywhere...

Exit the den and go back to Ozan, telling him about everything that transpired below. As he does not know the HQ's location either, he suggests following Khnum when he goes there to meet you.

Tail Khnum around Draynor Village, keeping your distance at all times. Eventually, he leads you to the abandoned jail east of the village (do not directly go there yourself, you must keep close to Khnum or you will lose sight of him). Enter the ruins to confront Khnum. When he finds out that you have been working together with Ozan, he explains why he turned over to the dark side.

If you lose Ozan by any manner, he will go back to the abandoned jail. 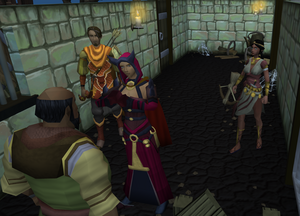 When Ozan was being banished from the city, Khnum was wrongly laid off for assisting his friend and letting him inside the palace. Khnum, serving loyally for the past twenty years, was devastated and became hateful of the city, and Ozan.

Suddenly, Leela appears, mistaking you and Ozan as members of The Skulls, ready to shoot her crossbow. After explaining her the situation, you discover that the kidnapping Khnum mentioned involves Al Kharid's prince, Ali – he was taken while he was touring Lumbridge. 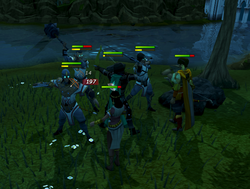 You are given a few interrogation techniques to use on Khnum – choose the option to let him stay locked up. Ozan, using his knowledge of Khnum, helps you convince him to give up the kidnapping plan.

Khnum reveals that they are simply henchmen, working for a Lady Keli, and that they only acted as guides around Misthalin, sometimes acting as the muscle. She was supposed to leave via a ship on the south coast of Draynor, along with their captor.

Head south, following the coastline, until you meet up with the kidnappers near the bridge that leads to the Wizards' Tower. Talk to Lady Keli to initiate another cutscene. Keeping a blade on the prince's neck, she warns you to back off. As soon as you refuse, she converts the mercenaries into thralls to fight you before escaping by waters.

Defeat the Skulls mercenaries and Joe and pick up the ransom note, which reads as follows:

Follow the path of the sun into the lion's mouth. The emir's heart for the prince's life. You have until the sun sets on the desert two days from now.

Leela, adamant to get the prince back, requests you to get the news to her father, the Spymaster, Osman. As he does not trust Ozan or you, she gives you a passphrase as a safe passage into the palace quarters. When asked, agree to accompany Ozan to Al Kharid – travel by whatever means are suitable.

When inside the city, head up to the palace entrance. Try to enter, but the guard refuses to let you under any circumstance. Speak to Ozan at the foot of the palace steps; fortunately, he is already hatching a plan to make his way into the palace through the rooftops.

Go to the crafting store in the north-eastern part of the city and make your way to the top. For all of the steps, you must wait until Ozan has also passed the previous obstacle before you can start the next one. If you leave the course in the middle, Ozan will be waiting at the palace entrance. Talk to him to have him follow you again. However, there may be a bug that causes your character to say you need to wait for Ozan when trying to go up the crafting store stairs, despite him already following you. In this case, you have to intentionally make him leave (you can lodestone teleport to Al Kharid to do so) and go through the course yourself, and Ozan will reappear once you reach the palace. 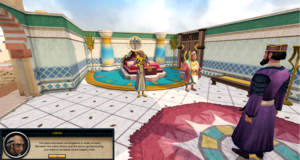 Osman and the Ambassador have a heated conversation.

Attempt to climb up the brickwork to trigger another cutscene where the Menaphite ambassador, Jabari is "negotiating" with Osman, Hassan and the Emir to put a Menaphite on the throne of Al Kharid, in case the ailing Emir dies. The Emir instantly abandons the idea of a Menaphite ruling Al Kharid and tells the ambassador that they will find the prince.

After the ambassador and the Grand Vizier leave, the Emir and Osman discuss the kidnap and the ransom. When Osman mentions that the "Kharid-ib" could be a demand, the Emir announces that the Kharid-ib must not leave Al Kharid, though Ali must be recovered at any other cost.

Ozan, opting to keep the prince as the main priority, suggests stealing the "Kharid-ib". Climb the brick-work and break-in through the skylight to the south. Inside the treasure room, open one of the ornate chests to obtain the scroll, History of the Kharid-ib; read it to understand the logic behind a puzzle. 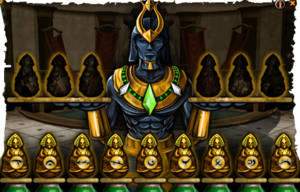 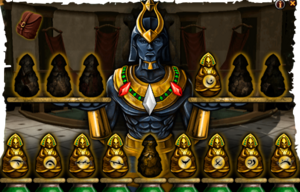 An example solution. You need to drag the chosen weight to the inventory icon on the top left.

In the centre of the room are 9 weights, 8 of which are equal in weight and the final is heavier than the rest. You need to retrieve the odd weight by inspecting and using the nearby Het scales.

Do NOT click reset before depositing a weight in your backpack, or the game will think that there are no weights on the scale even if you reset the puzzle again. If this happens, relogging should fix the issue.

You have exactly two weighings to determine which is the heaviest weight.

If you log off, you will find yourself outside the palace. Simply talk to Ozan again to be taken back into the treasure room. Alternatively, you can right-click the statue and "reset".

Use the weight on the Kharid-ib display to exchange it with the diamond. As you're doing so, the guards are alerted and a cutscene ensues, where you and Ozan are caught by Osman. You try to explain, but Osman doesn't trust either of you — until you tell him the passphrase that Leela told you (if you fail to do so, Ozan will eventually say it).

Congratulations, you have completed Stolen Hearts!

Osman, hearing that you indeed work with his daughter, orders his guards to stand down. You hand the diamond over to him and are taken to the Emir, who forbids it to be used as ransom. In the ensuing discussion, the Emir dies and Osman decides to let you and Ozan go free — and reinstate Ozan with a citizenship. 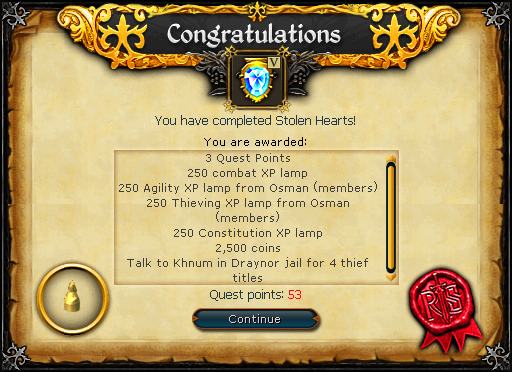 Stolen Hearts is directly required for the following quests/miniquests:

Completion of Stolen Hearts is required for the following: