The Kharid-ib, which loosely translates to "The Heart of the Sun", is a large diamond which houses part of Tumeken's essence. After Tumeken's sacrifice, it was recovered from the desert by the Zarosian Heriditas Expedition and stored at Kharid-et. It stayed there for thousands of years until it was recovered by the founder of Al-Kharid. It remained with the ruling family until the events of Diamond in the Rough, wherein the player and Ozan take it from Emir Shah's treasure vault in Al Kharid palace to pay the ransom for the kidnapped Prince Ali. During the quest the diamond is taken by Amascut, and remains in her possession as of 'Phite Club.

The Kharid-ib was either created by Tumeken or as a byproduct of his sacrifice in the Second Age, as it contains a piece of his essence. After Tumeken's sacrifice, the Mahjarrat Bilrach and Lucien lead the Heriditas Expedition into the Kharidian desert in search of the fallen god. At the centre of the plain where Tumeken sacrificed himself, they find a camp of nomads led by Temekel, a Mahjarrat still loyal to the menaphites, worshipping the Kharid-Ib. A skirmish quickly erupted between the two factions, with the Zarosians emerging victorious by threatening to destroy the diamond.[1]

Following the expedition, the diamond was secured in the vaults beneath Kharid-Et. The Kharid-Ib inspired the Zarosians to create the shadow diamond from the soul gem of a mahjarrat.[2]

Thousands of years later, the Kharid-Ib was recovered from the ruins of Kharid-Et by one of the founders of Al-Kharid. It remained in the possession of his descendants, the Emirs of Al-Kharid,[3] until the year 169 of the 5th age. As a young boy, the adventurer Ozan was banished from Al-Kharid for trying to steal the diamond.

In the quest Stolen Hearts, Lady Keli seeks the Kharid-ib and attempts to get it as ransom by kidnapping Prince Ali. Ozan attempts to steal the diamond, with the help of the player, in order to help rescue the prince but the two are caught in the act. Later, in Diamond in the Rough, Osman reveals that the Kharid-ib on display in the palace vault is in fact a fake. He hints that the real Kharid-ib is hidden within the heavy weight the player uses on the Scale of Het that protects the fake diamond on display. The player and Ozan then trek through the desert with the diamond in search of the prince. Several times when Ozan and the player have the gem, it temporarily takes control of other people, and implores the two to return it to Al Kharid. Those through which the Kharid-ib speaks have no memory of ever being controlled. Eventually, they reach a ruined temple to Amascut. There, it is revealed that Lady Keli is actually Amascut herself, who compels the player to give the diamond to her and then leaves.

The diamond is next seen in 'Phite Club, where it is seen in the final cutscene. It is seen attached to strange machinery above the Soul Altar surrounded by Amascut, Jabari and two thralls. The jewel glows and apparently briefly possesses Jabari and the two thralls to speak to Amascut. Tumeken urges his daughter Amascut not to give in to her own anger and to stop her plans. The jewel's words infuriate her who denounces being Tumeken's daughter and refuses to listen to his warnings and swearing to continue her plans.

The Kharid-Ib is a powerful artefact containing a piece of Tumeken's essence. It has the power to possess and speak through other people, leaving them with no memory after the fact. It is also able to raise the dead as undead through bright streaks of flame as seen during the skirmish with the Zarosians of the Hereditas Expedition. The various visions experienced by the Hereditas Expedition, such as days without sunlight, are likely to be because of the gem as well.

Trindine notes that Zaros chose to house the Vault of Hereditas under Kharid-Et rather than in his own Sanctum Sanctorum, or even near the city of Senntisten itself, suggesting that some of the artefacts there - of which the Kharid-Ib is one of the most prominent - are "dangerous beyond measure". [4]

The Ib, or heart, was an important piece of a person's soul in Ancient Egypt. The Ib was the source of individuality, good and evil, and recorded everything done in a person's life. It was believed that after a person died, their heart would be weighed against the feather of truth to determine if they'd acted right in life and deserved entry into the afterlife. If the heart was found to be too heavy, it would be devoured by the beast Ammut.

The diamond speaking through Apep and Heru. 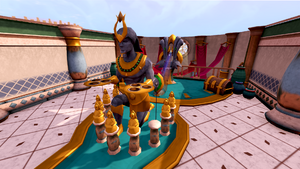 The guarding mechanism of the diamond.