From the RuneScape Wiki, the wiki for all things RuneScape
Jump to navigation Jump to search
The Old School RuneScape Wiki also has an article on: osrsw:Emir Shah
"Emir" redirects here. For the emir's successor, see Emir Ali Mirza.

Emir Shah is the former ruler of Al Kharid, a small city on the northern fringe of the massive Kharidian Desert. He is notable for having negotiated peace with The Pharaoh of Menaphos, ending the war between the cities. Knowing he was old and ill and that he would die soon, he had appointed his son as his successor.

Some time after the Great Carpet Crash of 76, Al Kharid fell into war with the capital of the desert Menaphos. Political tensions had risen to a level where a war declaration was made and the cities's armies faced each other. Knowing Al Kharid would be crushed by the power of the Menaphos, the young emir managed to diplomatically establish a peace treaty, albeit a shaky one, with the pharaoh.

The two cities remain hostile towards each other, even more since the pharaoh locked down his city due to the plague of Sophanem, but fighting has ceased. Menaphos, however, still wishes to take over Al Kharid once and for all.

In the late Fifth Age, Varrock commissioned an archaeological excavation north of Al Kharid, uncovering an ancient Duel Arena, likely after consulting with the Emir, who, supposedly out of historical interest, gave permission for the dig. The arena, in a surprisingly good condition, soon became a magnet for adventurers and duellists alike, contributing to the cultural heritage and tourism of Al Kharid. 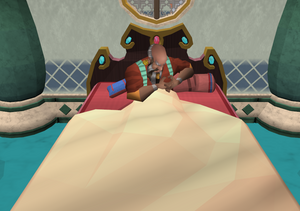 The Emir passing away due to a heart attack.

In 169, the Emir, realising his time has almost come to an end, wishes to see his son Ali Mirza and crown him the next Emir. However, the prince was kidnapped by Lady Keli and her two bodyguards, Apep and Heru, while he was touring Lumbridge. The emir put Spymaster Osman on the case, who sent his best agent and daughter Leela to follow the trail, which led to Draynor Village. There, she joined forces with the banished Ozan and an adventurer, who, while investigating the fate of an old friend, Khnum, who had become the leader of the Skulls gang, found out the Skulls were aiding Keli in the kidnapping. The party confronted Keli, but she took Ali in a boat to the desert, but not before turning the Skulls mercenaries into mindless zombies who tried to kill the party.

In the meantime, an ambassador from Menaphos, Jabari, had come to the emir to negotiate business. With the emir dying and his son missing, the Menaphite pharaoh wanted to have a Menaphite rule Al Kharid, even if only as custodian, to ascertain his command over the town. The emir refused and sent Jabari away, but he still feared a new war against Menaphos.

Prince Ali thus had to succeed him before Menaphos could start another war. His dying wish was that the adventurer and Ozan find his son without handing over the Kharid-ib as ransom, which Lady Keli requested. The Emir then finally passed away, apparently due to a heart-attack.

However, the ending cutscene of Diamond in the Rough reveals the true cause of the Emir's death. Jabari is secretly a follower of Lady Keli, who actually is Amascut, and applied a poison into the nightly incense, resulting in the Emir's demise. At the conclusion of the quest, Ali is made the new Emir of Al Kharid, saving the town from another war.

"You are not taking my... MY HEART!"
The Emir's last words before his fatal heart attack.
Retrieved from ‘https://runescape.wiki/w/Emir_Shah?oldid=35697904’
Categories:
Hidden categories: