The Jack of Spades

From the RuneScape Wiki, the wiki for all things RuneScape
Jump to navigation Jump to search
This article is about the quest. For the achievement, see The Jack of Spades (achievement).
For the person it refers to, see Ozan.

The Jack of Spades is a Fifth Age[1] quest. The main reward for completing the quest is access to Menaphos, located in the southern part of the Kharidian Desert. It requires the completion of the two Ozan "double bill" quests, Stolen Hearts and Diamond in the Rough, to start.

The Pharaoh and Ambassador Jabari discuss your trip to Menaphos.

At the Al Kharid palace talk with Emir Ali Mirza, in front of the throne on the ground floor[UK]1st floor[US] of the palace, who informs you that Menaphos wants to reopen trade with Al Kharid and has invited a delegation to Menaphos to negotiate a deal. He sends Grand Vizier Hassan to go as the representative of Al Kharid together with the player who was specifically invited by The Pharaoh. The Emir asks the player to not spy for Osman with which Osman agrees. Osman asks the player to meet them upstairs in the south-east corner on the balcony.

On the balcony Osman will discuss the city of Menaphos with the player. Osman will also confirm again that the player should not spy for him, but if the player notices something of interest then they should report it to him. Osman is particularly interested in the library and any books covering the line of succession of the pharaohs.

Flying over the desert.

Go upstairs to the top floor of the palace and meet Hassan on the southern side of the roof. Unequip the items in your main- and off-hand slots, dismiss any follower, and fly on the magic carpet with Hassan. Unlike the regular transportation, you have to manually move (Surge is the only ability usable while on the carpet). You can fly over most buildings except the Dominion Tower, and you cannot cross water although you shouldn't need to. Head south in the direction of Menaphos, taking any route you wish. During the ride, Hassan will make comments on any landmarks you fly over. If you would rather go to Menaphos directly, you can speak to Hassan.

The player and Hassan are greeted by Ambassador Jabari who will lead them to Grand Vizier Ehsan, the Menaphos merchant. Both Grand Viziers will negotiate the deal between the cities. The Jack of Spades appears, steals a tax ledger from Ehsan and escapes. Talk to the guards outside the building, who say the Jack of Spades was last seen heading into the Port district to the south. 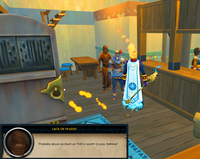 The Jack of Spades appears and robs Wadud.

Talk to Admiral Wadud in The Golden Scarab Inn in the Port district to the south. The Jack of Spades appears again and steals Wadud's prized trinket, then vanishes again. Speak to the guards to the south of the Inn, they say the Jack of Spades was seen heading to the Imperial district.

Go north out of the Port district, then west up the stairs from the lodestone. Alternatively, right-click the Shifting Tombs entrance to go directly to the Imperial District. Speak to Commander Akhomet outside the Great Pyramid. The Jack appears again and steals Akhomet's ceremonial dagger, before vanishing again. She advises speaking to Batal in the Worker district.

Head back to the lodestone, then north and west to reach the open bonfire in the Worker district and speak to Batal. Alternatively, the Shifting Tombs entrance can be used for quick access to the Worker District. The Jack of Spades appears once more and steals Batal's coin purse, then disappears again. Batal suggests searching for an underground hideout below the city.

The Jack is revealed to be Ozan.

Enter the Shifting Tombs entrance nearby (southwest) and speak to the Jack of Spades, who turns out to be none other than Ozan. He has been looking for the Kharid-ib and traced it to Menaphos. He says people have been searching underground and Amascut is behind it. He gives the stolen items which can be used to gain reputation with the four different districts. Return the four stolen items, which grant enough reputation to unlock the Menaphos Grand Exchange. You can take advantage of the Shifting Tombs area to quickly move between districts. After returning all the items, head back near the Merchant district and speak to Grand Vizier Hassan to complete the quest. 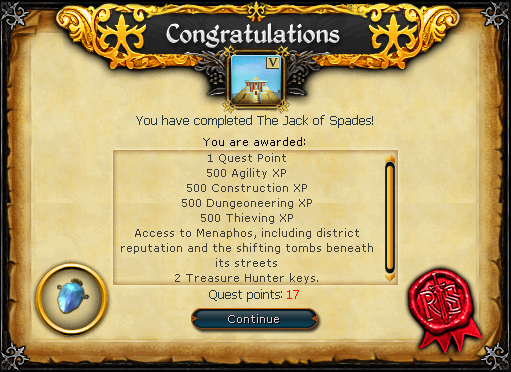 The Jack of Spades is directly required for the following quests/miniquests: