An 'animate dead' spell scroll is a Zarosian artefact which is made by restoring the damaged variant at an archaeologist's workbench after the damaged variant is excavated from the Ancient magick munitions excavation hotspot at the Kharid-et Dig Site with level 107 Archaeology.

The artefact can be read to cast a spell. This is used in The Vault of Shadows, where the scroll is destroyed upon activating the shadow button. 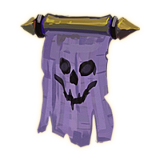 The 'Animate Dead' spell scroll in the journal.